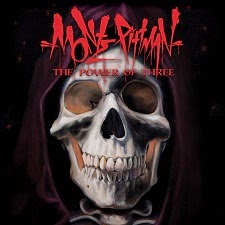 Being best known for his work with both pop artists Madonna and Adam Lambert as well as the industrial band Prong kind of makes Monte Pittman an anomaly within the metal world. With his third solo album, The Power of Three, however, there is little room left to wonder whether or not his true talent and roots lie on the heavier side of things.

The Power of Three's opening track and lead single, "Dark Horse", begins with acoustic guitar riff, but it still has this dark intensity to it. It soon goes into the rapid-fire heavy metal sound that will remain throughout the album. "Dark Horse" has sort of a Black Label Society quality to it, and I can almost picture Zakk Wylde jamming to this song, especially when the title comes up in the chorus. The rhythm in which the verse’s lyrics are sung is what really makes this song catchy and memorable. The vocals themselves aren't bad, but they're nothing spectacular either.

While the vocals lack some of the power and intensity that one would expect from such a heavy metal record, Monte Pittman's guitar godliness certainly makes up for it. The phenomenal solos from "Grand Illusion" and "Away From Here" honestly have me believing that Monte Pittman could be the Randy Rhoads of modern metal. His playing style is fast-paced, yet totally precise. Oddly enough, Monte actually took piano lessons from Randy's mother, Delores.

There are more great modern metal and contemporary hard rock riffs than you can count on The Power of Three. The bass rhythms from Max Whipple are always driving, and Kane Richotte's drumming is absolutely explosive, particularly on "Before the Mourning Son". Each song on The Power of Three is heavy, fast, and loud. No ballads here. The closest thing would be the ever so slightly slower song "End of the World". It's that one song that many albums have, that isn't the heaviest or the loudest, but for whatever reason it just sticks--and by God, you like it. It's certainly one of my favorites, and it seems the most current and "radio ready" than anything else on the album.

There is an undeniable thrash metal influence on The Power of Three. "Blood Hungry Thirst" is a great example with its Slayer-esque riffs. An early Metallica feel is especially present on the last two tracks "Missing" and "All is Fair in Love and War". The songs have a certain groove to them as well. Guitarist Alex Skolnick of Testament is a special guest on part of the 13-minute finale, "All is Fair in Love and War", as is Six Feet Under/ex-Cannibal Corpse vocalist Chris Barnes. His guttural death metal voice adds even more to this already heavy and rich album. This heaviness should not come as a surprise either, as Flemming Rasmussen--who is known for producing Metallica's Master of Puppets--produced The Power of Three.

Monte Pittman's The Power of Three makes 2014 look promising so far, at least musically. Pittman's guitar playing and songwriting talents are matched by few, and his reverence for the thrash and groove metal artists that came before him is apparent. His ability to respect the classics while still doing his own unique, relevant thing is commendable. This makes for a fantastic album in The Power of Three, which is likely to appeal to fans of high-quality music in multiple subgenres of hard rock and heavy metal.