A "Rock Child" Debuts into the Spotlight 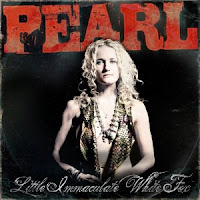 I was recently listening to Eddie Trunk's Q101 radio show, and Pearl Aday and her husband Scott Ian (most known for his work with the band Anthrax) were guests. The couple were promoting their band Pearl, named after its vibrant frontwoman, and their debut album Little Immaculate White Fox. I thought to myself, "I remember her!" It turns out, I had seen Pearl on VH1's Supergroup, a show that Scott took part in.

During this show, Eddie Trunk played Pearl's debut single "Rock Child." This song starts off with a wail that shows off the power and versatility of Aday's voice. This song is proof that she can go from a gut wrenching scream to a beautiful, yet still powerful, singing voice in an instant.

This song is a great opening track. The lyrics about being a fierce rocker help introduce Pearl (who has spent much time singing backup vocals for Meatloaf and Motley Crue, among others) to the world as a frontwoman. Because of her upbringing with her rockstar dad Meatloaf, the lyrics to "Rock Child" are autobiographical--"I’ve been a little girl livin’ center stage. I’ve been sleeping in a guitar case."

"Rock Child" has a classic rock feel, but nothing sounds more timeless than Pearl's rendition of the legendary Tina Turner song "Nutbush City Limits." As the second track, "Nutbush City Limits" isn't tucked away in the middle of the album like many covers are. It's practically front and center. It is a nicely updated, completely rocked out version of the original, but it is still immediately recognizable. The guitar riffs are heavy, and the vocals are full of the attitude that paints a picture of the little town in Tennessee as Tina Turner envisoned it in the 1960s.

Several other tracks from Little Immaculate White Fox, such as "Mama," "My Heart Isn't in It," and "Worth Defending" have a bluesy country feel that I didn't quite expect. Each of these songs have well-crafted lyrics (all written by Aday) that tell stories of love, life, and moving on. Because I expected to find all heavy rock songs on this album, these songs surprised me a bit. I'm not saying I dislike them. However, rock fans who are looking for something harder may initially put off by them.

There are plenty of rockers on Little Immaculate White Fox to please those with heavier palates. "Broken White," with its darker tone and scathing lyrics, is my favorite track from the album. My interpretation is that it is about fighting back after being abused or wronged. After only one listen, I found myself singing part of the memorable chorus--"Let's call it a war. It don't hurt no more. I fall up from the floor..."

Another one of my favorites, "Check out Charlie," features guitar legend Ted Nugent as a guest musician. This song contains some great riffs, and it shows off the skills of the band (Note: several of its members also played with Mother Superior). The vocals are great, the guitar playing is fantastic (It's Ted Nugent! Need I say more?), and the bass and drums are intense.

Pearl's debut record Little Immaculate White Fox is a surprising mixture of heavy rockers and soulful ballads. While there isn't a bad track on the album, the country and blues flavored songs were not what I expected--especially from a band that includes metal guitarist Scott Ian. Overall, the album is fun, rocking, and contains some great songs with heartfelt lyrics.

As a female and a life-long hard rock fan, I can't help but notice that the genre is dominated by men. With the release of Little Immaculate White Fox, it is refreshing to see a band fronted by a woman who can sing and perform like any of the metal gods. Pearl's vocal ability, talent, and sexy swagger truly make me proud to be a rocker chick.
Posted by Anonymous at 1:22 PM No comments: Posted by Anonymous at 12:18 AM No comments:

The Scorpions have just released what they say is their final album--Sting in the Tail. It hit U.S. store shelves late last month, and their new single "Raised on Rock" is getting some airplay on satellite radio and other rock stations that play new songs by classic artists.

"Raised on Rock" is a great track. It sounds like The Scorpions we all know and love, and is a solid attempt at making a hard rocking song that is sure to please longtime fans. The lyrics are fun without seeming contrived, and they really strike a nerve with me since I am a lifelong rocker.

Check out www.RockMaiden.com in the next few weeks for more Scorpions and Sting in the Tail updates. Also coming soon... reviews of Pearl's Little Immaculate White Fox and Slash's solo debut!
Posted by Anonymous at 4:38 PM 1 comment: