Anselmo enters the solo arena with 'Walk Through Exits Only' 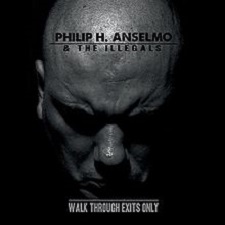 Former Pantera frontman, Philip Anselmo, can add something new to his already lengthy rock 'n' roll resume. He is back in the music spotlight with his much anticipated album, titled Walk Through Exits Only. Unlike his other projects--such as Down and Superjoint Ritual--Walk Through Exits Only is considered to be Anselmo's first true solo project. The album was recorded at his very own studio, Nosferatu's Lair in New Orleans, Louisiana, with his backing band, The Illegals.

Phil Anselmo has always been an interesting character, with his history of substance abuse and his very public rivalries with his former band mates--most notably, Pantera's Vinnie Paul. Anselmo has proven to be a very volatile rocker, leaving music fans always wondering what he will do next. Walk Through Exits Only does its best to answer that question.

"Music Media is My Whore" is the perfectly placed intro track on the album. It serves as an announcement for what to expect--"The rise of authentic anti-music / unearthly timbers, ominous sonorities, relentless, iterated non-melody / A shuddering original, unlike anything that has come before". Phil is definitely stating that he's trying to do something different, and he's using the medium of music as his "whore" to do it. This song and album are powerful and aggressive right from the start. Jose Gonzalez's drumming is fiery and militant, and Marzi Montazeri's guitar playing is heavy and distorted. "Music Media Is My Whore" is a short track, but it packs a lot of punch in such a small package.

The title track, "Walk Through Exits Only", is equally aggressive, with Phil shouting "It's ruined! It's ruined! It's ruined!" as it begins. The drumming in this song is extremely fast, sounding almost like a machine gun blast. The guitar riffs rival that speed, and the higher pitched parts give the song a slight classic metal sound. The rest of the song boasts lower guitar tones that are equally fast. The angry lyric, "Everybody ruins music, not just me" really sticks out in my mind. It seems as though it is Phil's way of responding to some of the criticism of his previous post-Pantera projects.

"Bedridden" is the single Phil and the band have recently released a video for. It features some of the album's best guitar riffs--if not the best--and has a heavy, driving rhythm. Phil's vocals are higher and throatier in the beginning, but they return to his usual range for the rest of the song. The highlight of "Bedridden" is when he sings the line, "Stay in that fucking dress, and I won't change a fucking thing!" It has such a killer pulsating beat accompanying it. It is one of the shorter songs on Walk Through Exits Only, but one of the most memorable.

The album's last track is called "Irrelevant Walls and Computer Screens". It contains lyrics about being lied to about who the "real enemy" is by the powers-that-be. It is angry and aggressive just like the other tracks--and then some. It features varying vocal styles from Phil, ranging from higher pitched to a lower growl. Also, unlike some of the other songs from Walk Through Exits Only, it has an impressive and substantial guitar solo. Clocking in at 12 minutes, it is the album's grand finale and quite unusual. The song winds down five minutes in and it becomes much slower and quieter with distorted guitar effects and ambient noise. It is crackly, scratchy, and filled with static for quite some time. At the very last minute, the song changes directions once more--having a laid-back bluesy melody with guitar, bass, and drums.

Walk Through Exits Only has some great moments that have the potential to satisfy fans of the angriest of metal music. Some hardcore Pantera fans may like it too but I can see how it could be very difficult to separate "solo Phil" from "Pantera Phil". One particular fan I listened to the album with said it was almost like a rehashing of Pantera vocals with studio musicians. He felt like he was waiting on a Dimebag solo that just wasn't coming--leaving him sad, disappointed, and confused. He added that the songs from Walk Through Exits Only are good and they are a good indicator of "what could have been" with Pantera or any of Anslemo's other bands. He absolutely nailed it with his observations, and I believe Down and Superjoint Ritual were stand out projects, partly because the bands were so cohesive and had so much substance to them.

While I admire Phil's unapologetic rage and aggression, the band he currently has assembled--The Illegals--lacks the same soul. With this solo career, it seems as though Phil is trying to replant his roots in different soil, and it's just not working. 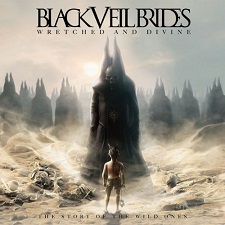 Revivalist glam rockers Black Veil Brides have released their third studio album, a concept album called Wretched and Divine: The Story of the Wild Ones. Wretched and Divine tells the story the rebellious "Wild Ones" who defend their lives and spirits against the controlling organization F.E.A.R.

F.E.A.R. stands for "For Every and All Religion" and is voiced by Wil Francis of William Control and Aiden. Spoken interludes that sound like radio broadcasts--known as the "F.E.A.R. Transmissions"--help the album flow and to tell the Wild Ones' tale as a rock opera.

"Exordium" kicks off the album. It introduces listeners to the F.E.A.R. organization and to the religious imagery that will play a major role throughout Wretched and Divine. "Exordium" features lyrics about the Kingdom of God, which are spoken dramatically over low music that sounds like it is just dying to erupt. And it finally does--into the album's first song "I Am Bulletproof".

"I Am Bulletproof" starts off with a slow and rather eerie piano melody, but the hard rocking guitars from Jinxx and Jake Pitts quickly join in. The riffs are immediately fast and heavy, and they evoke a pure metal sound that would please even the staunchest Iron Maiden or Judas Priest fan. As Andy Biersack's vocals hit with the first lyric "Here we go!" the song instantly becomes a rock anthem. Biersack's vocals are raw and powerful, and they really illustrate the song's lyrics about invincibility and strength--being bulletproof. The guitar solo is great, and the blistering fast notes and crystal clear pitch give this song even more of a decadent metal feel.

The album's title track, "Wretched and Divine", begins with thunderous drumming from Christian "CC" Coma and heavy guitars whose riffs become more intricate as the music leads up to the first verse. Just like "I Am Bulletproof", "Wretched and Divine" features another anthemic sing-along chorus that would surely be the highlight a Black Veil Brides concert. The song's lyrics are about being an outsider but being cool with it--even being empowered by it. This concept reflects the contradictory album and song title "Wretched and Divine".

"Devil's Choir" features a militant drum march intro followed by a blazing guitar melody. It starts out as a heavy song, as the title and intro would lead you to think. The chorus, though, is very melodic, catchy, and bright. It also contains some great backing vocals. This chorus almost doesn't fit, but it strangely does. Maybe it's a part of this whole "wretched and divine" paradox? "Devil's Choir" is later brought back to its metal beginning with a hard and heavy guitar solo.

"Overture" is the entirely instrumental track in the middle of Wretched and Divine. It sounds purely orchestral, but it does contain musical themes and melodies from the album's other tracks. It features a gorgeous string arrangement from the ultra-talented and versatile multi-instrumentalist, Jinxx. Not only does he play guitar, he plays the violin, cello, and piano as well.

I was instantly glued to the track "Nobody's Hero". It's fast, it's heavy, and it's definitely one of the harder songs on the album. The whole song is killer, but I especially love how right before the guitar solo, there's this huge guitar screech that is just so '80s. "Nobody's Hero" really reminds me of "Unbroken", the song Black Veil Brides lent to last year's Avengers movie soundtrack. The lyrics about being "a loaded gun" and "on the run" could easily be about vigilante superheroes. It would be such a mistake if this song weren't featured on the Avengers 2 soundtrack in the future!

"In The End" was the first single from Wretched and Divine, and it was also used as one of the theme songs for last year's WWE Hell in a Cell pay-per-view special. It has choral style singing in the intro, which also features a string arrangement that subtly remains throughout the rest of the song. It has fast, intricate guitar notes just before the vocals it, and the chorus is catchy with the many "woahs" in the backing vocals. The lyrics, which are about not being afraid to die, but wondering how you'll be remembered, are powerful and moving. "In The End" may be an appropriate name from the final song on the album, but it is not the final track.

Wretched and Divine: The Story of the Wild Ones ends with the final F.E.A.R. Transmission, which says F.E.A.R. has been defeated by the Wild Ones. However, the mysterious voice continues to taunt the rebels, telling them they can never truly escape F.E.A.R. There's definitely room for a sequel.

I thoroughly enjoyed this album--the music AND the lyrical subject matter. While the songs from Wretched and Divine focus on being an outsider and just being plain different, they do not have that whiny and insufferable, "Nobody likes me, I don't belong, so I'm going to go kill myself!" attitude that plagues a lot of the modern rock music--and often causes people to make fun of it. Instead of that, Black Veil Brides offers an alternative that steps up and says, "By God, I'm not like everyone else! I'm better, and I'm going to rise above and show them all!" It's rebellious, but in a very positive way.

I also can't say enough about the excellent guitar work of Jinxx and Jake Pitts. They both have a clear, dynamic, and powerful playing style. Not only were these guys classically trained and influenced by the works of Bach and Beethoven, you can very much tell they were raised on the metal classics too. That particular combination is known to breed good metal guitarists! This duo works so well, and they certainly boast some of the most impressive guitar skills I've heard from the newer hard rock and heavy metal bands.

If you don't think this album sounds quite theatrical and dramatic enough for you, Black Veil Brides has created an accompanying film for it called Legion of the Black. It has seen some limited release through Internet streaming on Facebook, and the band will also be releasing it with an upcoming special edition of Wretched and Divine: The Story of the Wild Ones.