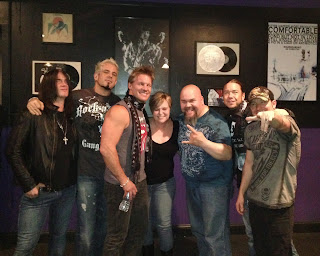 After so many years of being a huge fan of the band Fozzy, my dream of seeing them live finally came true on Friday, October 18, 2013. Not only was the concert itself mind-blowing, the whole experience was like no other.

My boyfriend Dean and I journeyed down to Marietta, Georgia, from our Knoxville, Tennessee, home for the overnight trip. Fozzy had actually just played the night before in Nashville, which was a bit closer to us. However, the Marietta show being on a Friday night was more convenient for us and our jobs. Plus, it was going to be ultra cool seeing the band's hometown show, as most of the guys in Fozzy hail from the Atlanta area.

Arriving at Tavern 120, our fantastic evening started immediately. The parking lot was full because of another event going on at the Tavern, so Dean let me off at the front door so he could find a space. A few minutes went by, so I walked around the corner where I spotted a tour bus. I thought there might have been some parking over there, but I wasn't expecting to see Dean chatting it up with Chris Jericho. As I approached them, I believe I said something silly like, "I leave you alone with my car for two seconds, and now you're talking to people!" Once I realized it was truly Chris Jericho, I said "hi," and he instantly remembered and hugged me. He even complimented my shirt (which was actually my mom's), and I got to give him the bottle of Grey Goose vodka I brought him as a gift. Dean and I didn't want to take up much of Chris's time, so we walked off telling each other we would see him later in the VIP meet and greet session we were signed up for. As we walked away, I asked Dean, "Did he hug me?!" I honestly wasn't sure because I was so excited, and everything had happened so fast!

Dean and I went into Tavern 120 for a drink and a quick bite to eat as we nervously waited for the VIP meet and greet to start. The place had a good menu and drink selection. Our quesadilla and cheese fries were satisfying, and the beer was certainly cold.

When it finally was time for the meet and greet, Penny the VIP assistant and venue's security guys led us into the concert area that was attached to the Tavern. Fans were able to buy band merch before the general public. I got a really cool "Spider in My Mouth" hooded tee and a double-disc Sin and Bones vinyl. During this time, we also got to visit with Mark Willis, Fozzy's manager who I had met along with Chris, Rich, and Frank, back in 2010 at an autograph session the band did at the Hot Topic in an Alpharetta, GA, mall. Somehow, Mark recalled Dean's last name. It blows my mind how people remember details from Facebook and Twitter!

After we all bought our goods, the band--Chris Jericho, Rich "The Duke of Metal" Ward, Frank Fontsere, Billy Grey, and Paul Di Leo--lined up at the table for an autograph session. I got my Sin and Bones CD and newly purchased record signed. Dean got his Chris Jericho action figure signed too. We got to talk to the band, and I was so nervous as I showed the band my "Watch Me Shine" tattoo, told The Duke about my dogs, talked about Twitter (The Duke said he keeps up with Dean and me!), and gave Mr. Jericho a Black Liver Society shot glass to enjoy his GG with.

The fans then took a group picture with the band. I kept poking fun at myself for being the only person with a drink in hand, and Dean was making folks laugh as he usually does. After that photo, there was time for fans to get individual photos with the band, which Dean and I took part in together.

When the meet and greet was over, there was still plenty of time before the actual concert started. After another drink and mingling with fans (we met another Knoxville guy!), the opening act, The Thrillhammers, took the stage. They performed some original songs and some covers. They were great and got the crowed warmed up for Fozzy. After the show, Dean told one of the band members about his podcast, and he got a CD to give the band some exposure. I'm excited about listening to it too!

The moment we had been waiting for had finally arrived. Fozzy was onstage, and I was just a couple of feet away from them. When the band first came out, Chris Jericho was wearing his infamous sparkling leather jacket, which made the crowd go absolutely wild. He was also wearing a Dio shirt, which made me happy too. The whole band looked incredible, and I particularly enjoyed bassist Paul Di Leo's facepaint homage to Nikki Sixx.

From start to finish, Fozzy exuded more energy than I'd ever seen in a band. They sounded phenomenal, and all of the songs--not just one or a couple--were memorable. Each member was captivating to watch, and they all did an excellent job making the fans feel like a part of the experience. Not to sound like a giggly school girl, but OH MY GOD RICH WARD TOUCHED MY HAND AT THE END!!!

After the show I had the pleasure of meeting in person and hanging out with Julie Ward (Rich's wife) and Tracy Fontsere (Frank's wife). Both were very friendly and eager to chat about the band, the show, and our pets we're always discussing on Facebook. I can't wait to see these lovely ladies again!

Since this was the final show of the Sin and Bones tour, I won't be spoiling anything for anybody by posting a setlist:

It is amazing how great things can come to those who wait. I've been a huge fan of Fozzy for so long, and now that I've seen one of their incredible live shows they are famous for, I can truly say my life is just a bit more complete than it was before.

Dean--being a longtime metal, wrestling, and overall Chris Jericho fan--was just as impressed as I was, summing it up best, "I was a fan of Jericho's wrestling, as well as the band's other ventures... but Fozzy is the rock/metal band to watch! Fan-friendly and an awesome band to see live, you've gotta see their live show!"