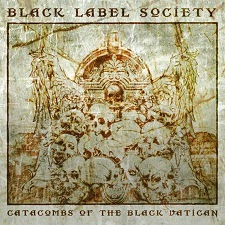 After spending some time on the acoustic cover album, The Song Remains Not the Same (2011), and live album, Unblackened (2013), Zakk Wylde's Black Label Society has released their first full studio album of original material since 2010's Order of the Black.

Opening a new chapter in their career with new drummer Chad Szeliga (ex-Breaking Benjamin/Scott Stapp), the band continues into the musical direction of Order of the Black while creating a whole new selection of songs for fans to enjoy. In typical Zakk Fashion, Catacombs of the Black Vatican is filled with explosive hard rock tracks and soulful acoustic ballads.

Catacombs begins with the hard and heavy "Fields of Unforgiveness". It's exactly the kind of song you'd expect from Zakk Wylde and Black Label Society. With its memorable chorus of, "So you think that it's over / So you think that it's done", this track is a great way to kick off the album.

"Fields of Unforgiveness" is followed by the band's latest hit "My Dying Time". It's a bit slower than the opener, but it's darker and heavier too. Zakk's solo is fantastic as usual, and this track was a great choice for the album's lead single. "My Dying Time" certainly picks up where Order of the Black left off.

The hard rockers make up the bulk of Catacombs of the Black Vatican. "Heart of Darkness", "Damn the Flood", and "Beyond the Down" particularly stick out. "Heart of Darkness" has quite a contemporary sound, and I could easily hear it as the next radio single. "Beyond the Down", while it is a shorter track, the riffs are no less impressive. They really highlight bassist John "JD" DeServio's skills. "Damn the Flood" might just be my favorite--with its high energy and driving rhythm. All of these tracks have the phenomenal solos you can always count on Zakk to deliver.

Catacombs isn't short on ballads either. "Angel of Mercy" is the first one that appears on the album. Any fan of the band could tell you that Zakk's vocals on Black Label ballads generally have a certain quality. On this track, however, the vocals didn't initially scream Zakk. I thought it was a guest musician or other band member at first. Nonetheless, I love the string arrangement that complements the guitar, and it makes a beautiful song even more beautiful.

The final track on the standard version of Catacombs of the Black Vatican is also a ballad. "Shades of Gray" is very soulful, with the signature Zakk vocals. It is mostly acoustic with a '50s malt shop rock feel. The guitar solo is electric, however.

The deluxe "Black Edition" has two bonus tracks, "Blind Man" and "Hell and Fire". "Blind Man" is a decent upbeat acoustic track, with some electric mixed in, but the ballad "Hell and Fire" really made an impression. It is romantic and emotional with lyrics like "For you I'd walk through Hell and fire" and, compared to the others from Catacombs of the Black Vatican, it really stands up to the band's previous ballads. This song should have been promoted to a normal album track and not be seen as the afterthought that bonus tracks often are.

New drummer Chad Szeliga proves to be an excellent addition to the band on Catacombs of the Black Vatican. His playing especially stands out on the track "Empty Promises". Szeliga is not the only new member of Zakk Wylde's Black Label Society. Last year, the band amicably parted ways with longtime touring guitarist Nick "Evil Twin" Catanese. Dario Lorina (of Lizzy Borden) has been added to the lineup to play for the band's live performances. Catanese was known for his ability to keep up with Zakk Wylde's incredible talent, and fans are eager to see if Lorina can do the same.

Catacombs of the Black Vatican is the perfect counterpart to Order of the Black and the band's previous albums. Zakk Wylde and Black Label Society have an unmistakable and unparalleled sound that remains consistent despite recent lineup changes.