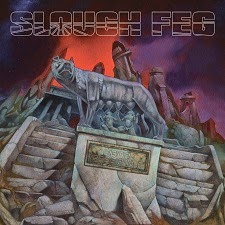 Slough Feg might just be one of the most interesting and prolific bands you've never heard of before. That's certainly the case for me. With their ninth studio album Digital Resistance, Slough Feg continues into their New Wave of British Heavy Metal sound with some Irish folk thrown in that ranges from blatantly obvious to pleasantly surprising and subtle.

Digital Resistance begins with the very folky "Analogue Avengers/Bertrand Russell's Sex Den". This track brings to mind the "Stonehenge" scene with the dancing dwarves from This is Spinal Tap. While it certainly isn't a metal song by any means, it is good and still has a certain heavy quality to it. The rest of Digital Resistance is undeniably metal, so this song is more like a lead-in. Vocalist/guitarist and only original Slough Feg member Mike Scalzi's singing is really emotive, and the lyrics such as "lust turns to avarice / overthrown by cowardice" seem to be elegant and, at times, intellectual. The rhythm in which they are sung stay true to the old timey ballad.

Title track, "Digital Resistance", follows, and it is NWOBHM to the core. With its Thin Lizzy/Iron Maiden feel, I could honestly be led to believe Slough Feg was some obscure older metal band I'd just never heard of before. "Magic Hooligan" is also especially Iron Maiden-esque after the Irish folk-inspired intro riffs. On this song, Scalzi sounds like the perfect combination of Paul DiAnno and Bruce Dickinson. He's got the attitude and rough edge of Paul with the strength and theatricality of Bruce. Like "Hooligan," Digital Resistance's lead single "Laser Enforcer" has a classic NWOBHM sound. The guitar work from Scalzi and Angelo Tringali is crisp and clear, and the way they work together is reminiscent of the Tipton/Downing or Murray/Smith power duos. Steve Harris would even be proud of Adrian Maestas' galloping bass line. When it was time to create an authentic early '80s metal sound, Slough Feg definitely looked to the right guys for inspiration.

"Habeas Corpsus" leans more toward the folk side of things with its lyrics and overall sound, but it still has a rock edge to it. It has a great electric guitar solo on top of the acoustic guitar that is present throughout the song. Strangely enough, this song reminds me of something you'd hear from Australian alt rockers Midnight Oil.

While some songs from Digital Resistance lead either in the folk or metal direction, final tracks "Curriculum Vitae," "The Luddite," and "Warrior's Dusk" all seem to nicely balance the two sounds.

The lyrical theme of Digital Resistance first presents itself in the album's title. While not a concept album, the songs pretty much stick to the topic of going back to basics and revolting against technology. Even though Slough Feg seems to be moving more and more into the New Wave of British Heavy Metal direction, the lyrical tradition of vivid storytelling is keeping the folk sound alive and well.

As a NWOBHM worshiper, I enjoyed Slough Feg's Digital Resistance. I do wish the songs had been a bit catchier, as the lyrics were definitely "smarter" than your average Def Leppard, Saxon, or even Maiden. The band's authenticity and uniqueness made up for it though. Digital Resistance is likely to appeal to fans of the metal classics, especially those looking for something a bit different that often borders on the cultural and intellectual.