'New Southern' rockers may be young, but they already have plenty to rage about 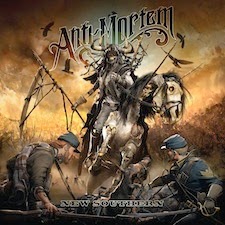 Formed in 2008 when most of the band members were still in middle school, Oklahoma's Anti-Mortem are finally releasing their debut album--New Southern. While most of the band members are only about 21 years old now, they have the talent and perspective of bands twice their age. They were even able to recruit producer Bob Marlette, who is best known for working with rock legends Alice Cooper (Brutal Planet, Dragontown) and Rob Zombie (Venomous Rat Regeneration Vendor).

New Southern's opener, "Words of Wisdom", sets the stage for this band and album's rebellious nature. Anti-Mortem are not afraid to speak their mind about today's social and political climates and their disdain of a strict religious upbringing. The title track "New Southern" follows, and this attitude continues. Singer Larado Romo's vocals are full of this attitude, and he seems very much inspired by the brash style of Alice Cooper and the snarling of Dave Mustaine. "New Southern" seems very much to be a celebration of Anti-Mortem's Southern U.S. heritage--without being all redneck and 'Murica about it.

The single, "100% Pure American Rage", perfectly describes this band. The opening riffs from co-lead guitarists Nevada Romo and Zain Smith are incredible, and the rhythms from bassist Corey Henderson and drummer Levi Dickerson are super heavy and make a lasting impression. I heard another single of sorts the band released nearly a year before New Southern was out, which was the track "Stagnant Water." I thought THAT was one of the best things to happen in rock and roll in awhile. I was so wrong--"100% Pure American Rage" and many of the other songs completely outdid it.

The songs from New Southern have a consistent sound, that to describe it as "great", would be an understatement. There are a couple that break this pattern, however. "Black Heartbeat", which isn't really a ballad, is the album's slowest track. It's one of my favourites, if not my absolute favourite. It is the only song with hints of romance, albeit a failed one. It's not quite the typical song about woman troubles that you generally hear from the band's contemporaries on rock radio. It's darker and much more intense, but I could easily hear this song as Anti-Mortem's next single.

The uncharacteristically slow song is immediately followed by the ultra heavy and thrash-oriented song, "I Get Along with the Devil". The lyrics in this one have an intriguing concept with the line, "I get along with the devil, but I hate that motherfucker". The riffs on this one are big and bold, and I can really hear a Zakk Wylde influence here. This can also be heard, even more overtly, in the song "Wake Up". Certain nuances in either Romo's or Smith's playing just scream Zakk. "Wake Up" is one of the more political tracks from New Southern. With lyrics like "We gave you your power, and we can take it away" and "Give us a reason not to riot in the streets / Give us a voice and set your people free", Anti-Mortem reminds us in a bold and empowering way of the startling truth that in a democratic society we can vote out the leaders who disappoint us--even if it takes a lot of work and balls.

From beginning to end, New Southern is strong, powerful, and soulful. The ending tracks "Truck Stop Special" and "Jonesboro" really show off Larado Romo's emotional authenticity and strength as a vocalist.

The dirty, gritty, blues-based metal influence on New Southern is undeniable. Anti-Mortem displays several generations of musical inspiration--Black Sabbath, Pantera, Black Label Society, and Hellyeah, just to name a few. This young band has a lot of rage fuelling its musical fire--which is passionate, intelligent, and very sincere. Anti-Mortem does not present your typical whiny teenage angst. New Southern is something much more serious and exceedingly meaningful.