Luminoth delivers a unique blend of rock sounds from 'other worlds' 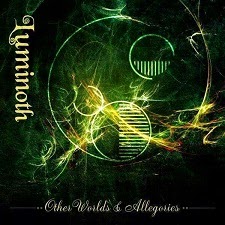 Working with Brian Vodinh of 10 Years, progressive rockers Luminoth present a broad spectrum of sound on their latest release Other Worlds & Allegories. This is their third album since forming in Knoxville, Tennessee in 2005.

As soon as Other Worlds & Allegories takes off, Luminoth has this phenomenal ability to use contrasting musical themes and abrupt changes, all while also creating a seamless blend of rock. This band can easily go from an ethereal groove to hard and heavy at a second's notice, but it totally works for them.

Opener "77-78" begins with more of a prog rock flow, but as it moves along, it becomes more of a straightforward contemporary rock song. During the potentially anthemic chorus, it starts to remind me of Foo Fighters. An energetic track, "77-78" kicks off Other Worlds & Allegories perfectly.

"The Beam" has monotone vocals to start, but it soon becomes much more dynamic. This track is much more aggressive than the opener, and it features what is probably John Springer's heaviest bass playing. A laid back guitar solo from Jason Henry seems to break up the aggression and add even more contrast.

Adding to their diverse sound, "The Beam" is followed by the much tamer "Innocence." It is reminiscent of later Beatles works, with its artsy layers and bright guitar tones--still having a heaviness to it. For whatever reason, around the 4:40 mark, singer Adam Henry takes on a whole new sound. He has this moment where is sounds a lot like Def Leppard's Joe Elliott. (Yes, the bands are completely unrelated, but I just happen to notice these things.) Henry shows a lot of versatility on this record. He can go from relaxed to aggressive, and in the case of the song "G.T.F.O.," downright maniacal.

These songs are great, but "Paralysis" has got to be my favorite. It is absolutely a solid modern hard rock song, and Luminoth would be missing a grand opportunity if they didn't choose this one to be single sometime in the future. It boasts a great riff and a memorable chorus, but it also retains many of the band's trademark experimental and prog qualities--wrapped up in a shiny little package familiar to mainstream rock fans.

While each song from Other Worlds & Allegories is one of a kind, they all have a large and complex sound that is littered with detail. Luminoth has even recruited a new guitarist, Chad Grennor of Annandale, to re-create this heavily layered sound for live audiences.

The catchier songs--"77-78" "A Feigned Serpent," and "Paralysis" will draw fans in on first listen, but overall, this album is more intellectual and expressive than hook-ish. With its diverse sounds and blend of contemporary and progressive rock styles, I recommend Luminoth's Other Worlds & Allegories to rockers who are looking for something artistic and intelligent, yet completely accessible.

Independent Release
Luminoth on Facebook
Posted by RockMaidenBritt at 1:02 PM