Fozzy's 'War' is one of inspiration, musical diversity 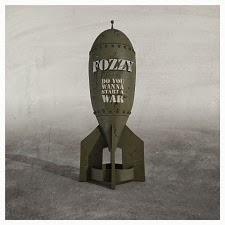 The Chris Jericho-fronted band Fozzy has released their sixth studio album, Do You Wanna Start a War. It comes on the heels of 2012's Sin and Bones. Do You Wanna Start a War is the band's fourth album of (almost) exclusively original material, and it is solid evidence that Fozzy is carving out their place in the hard rock world. They are diverse and adaptable, but when you hear Fozzy, you know it's them.

Produced by the band's lead guitarist, Rich "The Duke" Ward, Do You Wanna Start a War kicks off with the title track. It gets the listener excited right from the start, and it is enthusiastic and motivational with the catchy backing vocals of, "Do it right now!". "Do You Wanna Start a War" is certainly a hard rocker with great guitar riffs from The Duke and Billy Grey, and it is a great way to begin the album.

Keeping with the same enthusiasm and inspiration, "Tonight" is an emphatic track with an '80s pop metal feel. It even features guest vocals from Michael Starr of Steel Panther, and it has fun lyrics about throwing caution to the wind and having a great time, no matter what anybody else does or thinks.

"Unstoppable" has an empowering message about seeking success and relentless in the mission. It features singer Christie Cook on vocals. Chris Jericho complements her well, but Christie is definitely the one who shines here. "Unstoppable" is a heavy, yet positive, song, and it also happens to feature a phenomenal guitar solo from The Duke.

Fozzy really mixes it up, however, with the track "Lights Go Out", which also happens to be the lead single from Do You Wanna Start a War. It features many electronic elements, and the beginning is kind of "dancy." But it is also heavy, like in a Powerman 5000 sort of way. By the second half of the first verse, "Lights Go Out" becomes all out guitar-heavy metal. The lyrics are sexy, and the beat is pulsating. It's a song that really grows on you, and it is growing popular as well--it will be the theme song to this year's WWE SummerSlam event.

"One Crazed Anarchist" is another song the band has been promoting as a single of sorts. It's very heavy--with the death metal-inspired chant of "One crazed anarchist! One crazed anarchist!"--and it has some of the electronic production, but certainly not light "Light's Go Out." It boasts what is possibly the best guitar riff on the whole album, and it fits very well with the war theme of the title track.

"S.O.S." may be the most surprising song on Do You Wanna Start a War. While the band was known for doing covers of Judas Priest and Scorpions songs early in their career, it's hard to imagine Fozzy covering Abba. Fozzy's "S.O.S." is a keyboard-laden hard rocker, with a Styx-esque theatricality to it. This sad, dark song works very well getting a rock 'n' roll "upgrade."

"No Good Way" captures the Fozzy sound best of all and is my overall favourite. The chorus is catchy and memorable, the riffs explosive, and lyrics are absolutely fantastic. The "take what you want" line really stands out. The band should really consider releasing this song as a single, as this song would definitely be a hit on modern rock radio.

Do You Wanna Start a War's final track "Witchery," with its heaviness and driving rhythms from drummer Frank Fontsere and bassist Paul DiLeo, is another favourite as well. It is reminiscent of the band's All That Remains days. This one has a great guitar solo in the middle, and Paul's bass solo at the end is very strong.

Fozzy's Do You Wanna Start a War contains one great song after another. Each of the songs are unique and memorable in their own way, but they all have that distinctly recognizable Fozzy sound with the heavy riffs and melodic choruses. There is not a low moment or skip-worthy song on the whole album, and it goes above and beyond their last album Sin and Bones, which I thought would be nearly impossible. With Do You Wanna Start a War, Fozzy rose to the challenge and keep on proving they are destined for rock supremacy.