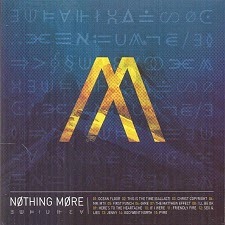 San Antonio hard rock band Nothing More has four other albums and eleven years under their belt, but they are finally gaining major attention with their fifth album, the self-titled Nothing More. They have recently played several festival dates in the United States, and their single "This is the Time (Ballast)" has grown into something huge on rock radio. The band's sound is hard to define, but one can surely describe the components that come together and create something that is special.

The first few tracks from Nothing More fall into the hard-rock-meets-electronic category. "Ocean Floor" is the ethereal intro into the album's lead single "This is the Time (Ballast)." The first time I heard it--which was on the SiriusXM satellite radio channel Octane--the vocal effects somehow reminded of the Batman villain Bane. "Ocean Floor" is to be played seamlessly with "This is the Time (Ballast)". When the song hits, it is bombastic metal. The lyrics, about lettings go of a negative past because it holds us back, are cathartic. I enjoyed Jonny Hawkins' vocals on this one. They're distorted at times, but his higher range is impressive, even though he does not fit the mold of the classic metal singer.

"Christ Copyright" is another heavy rocker, just not as ethereal. The bass and drums are weighty on this one. As a matter of fact, vocalist Johnny Hawkins plays his own drum kit in addition to the band's formal drummer. This adds a lot of the heaviness to Nothing More's style. The lyrics and the title "Christ Copyright" alludes to the idea that the religious right wing tries to have a monopoly on Christianity, and morals in general. I like the sentiment. In the same vein, "Mr. MTV" offers a scathing criticism of the youth of today and their popular culture, including commercialism, fakeness, gratuitous sex, and drugs. It is also critical of technology, particular the "i" stuff. I find this rather ironic, because without technology, the band wouldn't be able to have the unique sound that they do. The intro to "Mr. MTV" is great. It is a take on Sting's infamous vocals on the Dire Straits song "Money for Nothing". The lyrics "Empty Me, empty nation, empty us of inspiration," is clever, as "empty" is the "MT" of MTV.

While the electronic accented hard rock is present throughout Nothing More, there are other songs that add contrast.

"First Punch" is definitely different from the album's previous track, with its punky alt rock feel. I enjoy the driving rhythm of it. "Here's to the Heartache" is a contemporary hard rocker. It is my favorite along with "This is the Time (Ballast)" and I could see it being another hit single for the band. It is catchy and memorable, and it has empowering lyrics about how the bad parts of our past lead us to where we are today.

"Jenny", which boasts an acoustic intro, has emotional lyrics about a troubled drug-addicted girl who put her family, particularly her mother, through hell. "Jenny" has subtle electronic effects and great vocals. This song starts out mild, but it totally rocks out in the chorus. If you've ever had a loved one who struggled with addiction or mental illness, this one will hit you right in the feels. "God Went North" is another emotional one. It features an electronic intro with distorted vocals. It is about a mother dying in a hospital, and she wants to live long enough to see her son marry. The music swells as emotions build.

Nothing More contains two instrumentals of sorts. "Gyre" is a heavily acoustic song, and the only words are from an old recording of Buddhist/comparative religious author Alan Watts. Nothing More's Facebook page lists scholars and philosophers like Watts, Carl Jung, and Eckhart Tolle as influences--rather than a bunch of musicians--so this may not be shocking once you learn a little more about the band. The album's finale "Pyre" is similar. It is longer, with ten minutes of ambient ocean waves and wind sound, and is accompanied by Alan Watts' "The Nature of Consciousness" speech.

Nothing More is certainly diverse, and their sound is hard to nail down. I could almost call them prog rock or experimental, but their songs seem to have a lot more of a definite direction than a lot of prog or experimental stuff. The songs also lack the virtuosic solos that one would find in prog metal and metal in general. If you're strictly looking for solos, Nothing More probably isn't for you. But if you're looking for unique and exciting hard rock, you'll be excited by this band. "This is the Time (Ballast)" got me interested right off the bat, and I was glad to hear more. I will be seeing Nothing more in October, and I am anxious to see how this uncommon band's sound translates to the live stage.