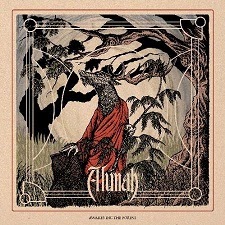 Birmingham's Alunah calls their sound doom psychedelic. According to their Facebook page, they are influenced by "Black Sabbath, nature, myth, and magic." With their third release Awakening the Forest, this description is spot on. The feminine vocals of singer/guitarist Soph Day also set Alunah's sound apart from most other doom metal bands.

Awakening the Forest rouses with "Bricket Wood Coven". The intro riffs are fuzzy, distorted, and filled with feedback. The bass is super thick, and the slow flow of the song fits well with the repeated lyric "there was a lady..." that starts each verse. The guitar solo is nice and bluesy, but at 8:39, the song kind of drags. The overall sound is great, however, and you can really hear the Sabbath inspiration. "Bricket Wood Coven" tells the story of a village in England known for some early Wiccan activity that was instrumental in advancing Wicca as a modern religion.

The album's title track, "Awakening the Forest", has a similar sound, but it seems less draggy. It is quite memorable when the title is sung in the chorus, and the lyrics fit with the nature and mythical themes the band adheres to. "Scourge and the Kiss" is also very doom-oriented, and it has features what is Dan Burchmore's thickest and heaviest bass lines on Awakening the Forest." "The Mask of Heme" is a bit slower, and Soph's vocals more melodic.

"Heavy Bough" is Awakening the Forest's lead single, and it breaks away from the typical doom psychedelic mold. It has some fantastic classic metal guitar riffs that stand out among the doom metal riffs. The catchy, almost upbeat chorus of, "sitting on the mossy stone / carving hearts into the bone," is sexy and oozing with attitude. This is my favourite track from the album. I would call it "doom metal plus."

Bonus track "The Summerland" is slow and melodic. It is dark, but doesn't have that doom metal thickness for most of the song. It does get heavy toward the end, and I was highly impressed by the guitar solo in the middle.

Don't let the fact that Awakening the Forest only has six tracks fool you. This is not an EP. With the average song being eight minutes long, it is certainly a full-length studio album. While the album does have some moments where the songs feel long and drawn out, Alunah's overall sound makes up for it. I am certainly a fan of Soph Day's vocal style and no-nonsense approach. She and her guitar counterpart, Dave Day, complement each other well to create Alunah's unique psychedelic doom metal sound.