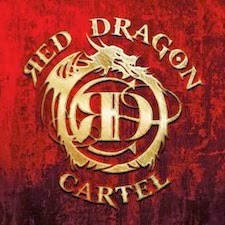 After a lengthy hiatus from the public eye, Jake E. Lee is back in the business of making rock 'n' roll with his newly assembled band Red Dragon Cartel. Before their self-titled debut album was released in January, Red Dragon Cartel made their live debut at the Whiskey A Go Go nightclub in Los Angeles on December 12th 2013. It did not go off without a hitch, however. A less than stellar performance from vocalist D.J. Smith led to disappointment and scathing reviews. Smith--known for his work with the band Harem Scarem--apologized for this, and Lee was pretty much forced to defend his choice of singer to fans. After watching videos of said performance on YouTube, I was anxious to hear how the vocals on the album really panned out. They couldn't get much worse, but how much better would they actually be?

The first track off Red Dragon Cartel is the band's lead single, "Deceived". It's hard to not notice that the intro riffs are really reminiscent of Bark at the Moon-era Ozzy. I was impressed there, but not at all when the vocals kicked in. They do improve at the "bodies burning/world is turning" line, and the chorus is catchy in a Van Halen sort of way. Despite a shaky start with the vocals, "Deceived" is a good song for starting the album. I was curious about how much more Ozzy-sounding stuff I should expect, but this is the only song from Red Dragon Cartel that REALLY has that vibe. That was nice to hear, but it was also great to hear other facets of Jake.

The next track, "Shout it Out", has some hard riffs in the intro, and bassist Ronnie Mancuso's are especially heavy. D.J. Smith's vocals are more fitting for this song compared to the first, but they're still not great. That high note before the first chorus is pretty shaky. The lyrics seem a bit repetitive at first, but they quickly become catchy and energizing. I enjoyed Jake's solo on this song, particularly the part where it speeds up.

Another song that is heavy on the bass--along with having some blazing fast guitar riffs--is "Feeder". Upon my first listen to Red Dragon Cartel, I figured D.J. would be singing on this one too. But from out of nowhere, there is Robin Zander from Cheap Trick! He is one of the four guest vocalists featured on the album--the others being Maria Brink of In This Moment, Paul DiAnno formerly of Iron Maiden, and Canadian singer/actress Sass Jordan. Robin was the absolute perfect choice for this track. His singing style fits well with Jake's playing, and I would love to hear more collaborations from the two of them. "Feeder" sounds so much more professional and polished than the previous songs, and it's a lot of what I initially expected Red Dragon Cartel to sound like.

Maria Brink's track "Big Mouth" is another high point for Red Dragon Cartel. It boasts some really raw, heavy guitar riffs, and the vocals are absolutely sexy. This song is a great blend of old and current metal. I'm a major In This Moment fan, so of all the tracks on the album, this one really caught and kept my attention.

The heaviest song from Red Dragon Cartel is "War Machine" and, no, this isn't a cover of the KISS song. The intro guitar riffs are distorted and are certainly a throwback to early metal. It is a bit darker than the rest of the album's songs, and it has a major Black Sabbath feel to it. D.J. Smith's vocals aren't too bad on this one as he attempts to enunciate like Ozzy without overdoing it. I also enjoyed the "ooh's" in the backing vocals.

"Exquisite Tenderness" is the album's final track, and it is an interesting way to wrap things up. It is a short instrumental piano composition played by Jake E. Lee. It's nowhere near rock 'n' roll, but it's still very good. It's the music I imagine Schroeder from Peanuts playing once he grew up. Just try to picture it.

Some of the songs from Red Dragon Cartel are quite good. "Deceived", "Feeder", and "Big Mouth" particularly stand out. Jake E. Lee--who I've always seen as underrated--has undeniable talent. I am just less than impressed with his choice of vocalist in D.J. Smith.

I am also confused about this album's goal, since half of the songs have guest vocalists and other musicians who lent their talents before bassist Ronnie Mancuso and drummer Jonas Fairley were recruited. Bassists Rex Brown (Kill Devil Hill/ex-Pantera), Scott Reeder (Kyuss), and Todd Kerns (Slash's Conspirators) played on the the album; as did drummers Jeremy Spencer (Five Finger Death Punch) and Brent Fitz (Slash's Conspirators). This makes me wonder if this is a real band or Jake E. Lee & The Hired Help. I have seen the band billed as Red Dragon Cartel and "Jake E. Lee's Red Dragon Cartel". Pick one. Seriously. Perhaps Jake should have taken Slash's route and done one album with several singers before settling on the right man (or woman) for the job. Either way, the album is recorded and out, and there's nothing left to do but sit back and enjoy Jake E. Lee's much awaited comeback.