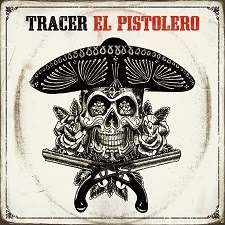 Australian rockers Tracer have teamed up with renowned producer Kevin Shirley to bring forth their third album, El Pistolero. Shirley has worked with legendary acts such as Iron Maiden, Led Zeppelin, Aerosmith, and Slayer. Tracer hopes to pay homage to all these guys with their classic rock and early metal inspired sound. This newest release is a themed album of sorts--focusing on the bad ass, gun-crazed title character El Pistolero.

The album's opening track is the appropriately titled "El Pistolero". It has a heavy sound right from the get-go and some straight up rock and roll guitar riffs. I immediately liked singer Michael Brown's vocals--they fit well with the style of music, and he sings with a lot off feeling. It's definitely not that whiny shit that has become so popular these days. The lyrics, telling the story of an "above the law" gun-wielding madman, set up the theme that is present for the rest of the album.

"Lady Killer" follows the opening track. It starts out a bit slower but soon becomes an equally hard rocking song. The chorus is super catchy, particularly the line, "See you in Hell where the rest of my friends will be!" The guitar solo has a classic rock-inspired sound.

"Ballad of El Pistolero" is an acoustic ballad that is mid-album. It sounds so unlike all the previous songs. It is quite slow and has a Spanish feel to it. The vocals are quiet, almost monotone. It goes straight into the heavy, gritty rocker "Santa Cecilia". At a minute long, it works very well as a lead-in.

One song on El Pistolero that I just really dig is "Wolf in Cheap Clothes" and I love the humorous play on words in the title. The intro riffs actually have a KISS sound to them, and the same rocking riffs are appear between the verses. The track also features a nice classic rock styled guitar solo with some blisteringly intense notes.

The next track, "Scream in Silence", is a bit different, in that it starts out so slowly and is rather ethereal. Andre Wise's drumming kicks in, giving the song some rhythm. That is joined by calm, yet somehow still emotional, vocals and a laid back guitar and bass. This all changes for the much more powerful chorus. The song becomes louder and heavier, and it momentarily takes on a '90s grunge sound.

"Until the War is Won" has an interesting Western sound in the guitar work and rhythm. Its slowness definitely evokes an image of the desert. The gun fighting subject matter and lyrics about vigilantism make his track even more perfect for this album.

"Now I Ride" is the final track on El Pistolero. It is hard and heavy like the album's earlier tracks. It is a good song, but I question its placement on the album. The lyrics certainly keep with the theme of El Pistolero, but the uncommon sound of "Until the War Is Won" could have been a better fit as the finale since it is so memorable.

This album is unquestionably enjoyable. Several songs stuck out as good ones--namely "Wolf in Cheap Clothes" and "Scream in Silence". The Western and desert influences were unique and refreshing to hear. Tracer have not yet joined the ranks of those other Kevin Shirley-produced acts, but they are a promising new rock band. Tracer and their album El Pistolero do have a great sound to them, one that hard rock fans--particularly grunge that lean toward the Soundgarden-type stuff--are sure to embrace if given the chance.