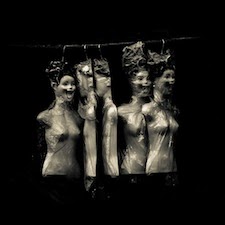 The Devil Rides Out are a lot of things - heavy, bluesy, gritty, and sludgy - but there is one thing about them that really surprises me. They're Australian. When I first listened to this band, I would have sworn up and down they were from the American South. I'm from the American South, and The Devil Rides Out sure fooled me. The sound these Perth rockers project creates an image of a band playing in a dark, smoky bar in the middle of Texas with the likes of ZZ Top.

After gaining a following with their trilogy of EPs, The Devil Rides Out released their first full-length record The Heart & The Crown in 2010. They now have five new tracks to share with the world on their latest EP, Ugly Creatures.

The EP begins with the title track of sorts, "Ugly Creature", which starts off with a very heavy bass line followed by an energetic "woo!" This "woo!", however, does not sound like the vocals that are to come. I was expecting some powerful and blues-oriented vocals, but not something this loud. Singer Joey K's voice reminds me a lot of Glenn Danzig with a bit of Henry Rollins and even some Billy Gibbons thrown in. Andrew Ewing's guitar playing is hard and heavy, and it is most prominent between verses and during instrumental breaks. "Ugly Creature" is a long track, clocking in at 7:15. It ends with a lengthy jam where "Oh my God!" is shouted multiple times.

"Burn Again" is a re-tooled version of the song "Watch It Burn" from The Devil Rides Out's The Heart & The Crown album. It opens with amp feedback, and the vocals are much harsher on this version of the song. "Burn Again" has more of a slow, stoner rock vibe than the opening track, and it is also slower than its "Burn Again" predecessor. Something I find rather odd about the verses is that Joey K basically sings three words at a time, making an interesting rhythmic pattern. "Watch It Burn" is the shortest song on the EP at 4:05. It's certainly not a bad song, but I like the energy of the original "Watch It Burn" a lot better.

"The Righteous Walk" is Ugly Creatures' lead single. The intro is very blues-based, and the track is quite slow and laid back. This is the one I can REALLY imagine being played in the dark smoky bar in Texas. The lyrics about a man walking the streets at night to get home to his woman are timeless. The vocals on this track - and most of the others - are very loud and overpowering, almost having a Tasmanian Devil or Incredible Hulk sound to them. While I do understand that singer Joey K is trying to get a certain heavy, bluesy sound across, it often seems like he's trying too hard on this EP. His vocals on the previous EPs and album sound much more natural and balanced. Despite this, I really enjoyed the song "The Righteous Walk", as it stands out among the other tracks. It is quite long and so different from the other songs, so I am a bit intrigued that the band picked it to be the lead single.

The Devil Rides Out's Ugly Creatures has a dirty blues feel with a hint of jamming stoner rock. It is slow at times, while always retaining its heaviness. The vocals are heavy and interesting, but also often forced. I did enjoy the single "The Righteous Walk" because the raw emotional outpour made it really stand out amongst the other tracks. I'm on board with the overall sound of The Devil Rides Out, and I would recommend Ugly Creatures to fans of Clutch, Superchief, and other heavy metal bands from the blues-based stoner metal realm.

Posted by RockMaidenBritt at 10:01 AM