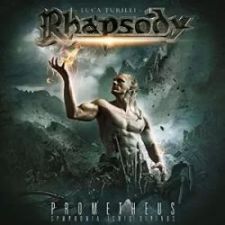 The Luca Turilli's Rhapsody lineage carries on with their latest release, 2015's Prometheus, Symphonia Ignis Divinus. Prometheus features Alex Landenburg on drums, as Alex Holzwarth was unable to fulfill commitments with both bands. Also, Prometheus, Symphonia Ignis Divinus marks the return of guitarist Dominique Leurqin, who was unable to tour supporting Ascending into Infinity after severely injuring his hand with a saw and spending months recovering.

Prometheus, Symphonia Ignis Divinus opens with "Nova Genesis (Ad Splendorem Angeli Triumphantis)". Along with the symphonic and metal elements one would expect from a Rhapsody album, there is also heavy use of feedback and an electronic beat. Male and female operatic vocals join the mix, and more string-based instrumentation builds. A deep voice, much like the one from movie trailers, narrates into the next track. Luca Turilli's music is often described as "cinematic metal" so this booming voice is fitting to introduce Prometheus, Symphonia Ignis Divinus.

"Nova Genesis (Ad Splendorem Angeli Triumphantis)" serves mainly as an introduction, so "Il Cigno Nero" is the first full-bodied song from Prometheus, Symphonia Ignis Divinus. It begins with piano. Guitars, drums, and a crystal clear glass-like synthesizer are slowly added. "Il Cigno Nero" starts with both male and female operatic vocals, but the man soon overtakes the woman. The lyrics are in Latin and Italian, and the guitar solo is blazing fast and pure metal.

Prometheus, Symphonia Ignis Divinus' lead single is "Rosenkreuz (The Rose and the Cross)". It is also the first track on the album to contain chiefly English lyrics, but some are in Latin as well. The intro reminds me of that popular '90s album with the chanting Benedictine monks. (It went platinum. Twice.) After the Gregorian introduction, "Rosenkreuz (The Rose and the Cross)" becomes fast paced with soaring operatic vocals from Alessandro Conti. The ballad-like lyrics tell the story of Christian Rosenkreuz, the founder of a secret medieval philosophical society.

While Prometheus is never dull, some of its most interesting moments come with "Anahata" and "One Ring to Rule them All." The intro to "Anahata" is reminiscent of the theme from Star Trek crossed with something straight out of Zelda. The lyrics are mostly in English, and the vocals are soaring. The string arrangement has a darker side, and the vocals get darker in spots as well. "Anahata" gets faster and brighter, then it goes back to the darkness. It even has a bit of a Middle Eastern vibe toward the middle. It is a fantastic song, but there is definitely a lot going on--making it difficult to process the first few times you hear it.

"One Ring to Rule them All" is Luca Turilli's ode to Lord of the Rings. Its lyrics are also English, aside from the lines that are in Black Speech, taken from the Elvish inscription inside the eponymous One Ring. Filled with literary references and adventure, this track also has the most overall power metal feel to it--particularly in Alessandro Conti's vocals. It is not short on symphonic grandeur either. Adding to the band's penchant for cinematic flair, a sinister voice calling out, "My precious!" will sound familiar to anyone who has seen the Lord of the Rings films.

Completely switching up the pace is "Notturno". With solely Latin and Italian lyrics, this song feels the most like like opera instead of hard rock or heavy metal "with operatic extras." Conti is joined by a female singer, and their voices blend perfectly. "Notturno" builds into something quite heavy that isn't metal--but is certainly majestic.

In contrast, "King Solomon and the 72 Names of God" is very much metal, or Luca Turilli's version of metal, that is. This track is raw and tribal, and it boasts a great deal of Middle Eastern influence. It has huge metal riffs on top of the existing symphonic bombast. "King Solomon and the 72 Names of God" is a bit of a spiritual journey, with references to the Kabbalah branch of Judaism. There are lyrics in Latin and English, but the substantial use of Hebrew is the most fascinating.

As if Prometheus, Symphonia Ignis Divinus weren't colossal enough, it finishes off with the 18-minute multi-movement piece "Of Michael the Archangel and Lucifer's Fall Part II: Codex Nemesis." It is the sequel to "Of Michael the Archangel and Lucifer's Fall" from Ascending into Infinity. Like the opener "Nova Genesis (Ad Splendorem Angeli Triumphantis)" this track features some electronic elements and the narration from the big movie voice. Each movement is quite different. Some have Latin lyrics, some have Italian, and some are English. One named "The Astral Convergence" has no lyrics at all. The portion IV called "The Divine Fire of the Archangel" contains some of my favourite vocals from Prometheus. They seem to be the most theatrical, and Alessandro Conti sings with such an attitude that summons the spirit of the great Freddie Mercury. The final part, "Of Psyche and Archetypes (System Overloaded)" includes some blistering guitar riffs that fill this unconventional symphonic number with metal distinction. The simplest way to describe it all would be "Queen on steroids and in Italian".

With a second album in tow, Luca Turilli is continuing his interpretation of the Rhapsody band and his unique brand of cinematic metal. Prometheus, Symphonia Ignis Divinus is a magnificent collection of symphonic and operatic music, combined with hard rock and metal--all centred around diverse, intelligent, and captivating subject matter performed in seductive language.