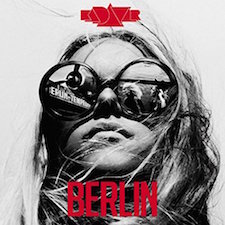 Germany's three-piece retro rock outfit Kadavar continues to dig down to the earliest roots of hard rock and heavy metal with their latest release, Berlin. Named for where the band was formed and found a great deal of influence, Berlin is Kadavar's third studio album and the follow-up to 2013's Abra Kadavar and 2014's Live in Antwerp. It is the first full album of new material with bassist Simon "Dragon" Bouteloup, who played on part of the previous one after original member Philip "Mammoth" Lippitz left.

Berlin, which was in fact recorded there, begins with the energetic track "Lord of the Sky". The guitar riffs instantly hearken back to the '70s and are reminiscent of the earliest KISS records. It's just a little less dimensional since there is only one guitarist in this case. The vocals are okay, and they definitely aren't my favourite aspect of the song. Christoph "Lupus" Lindemann is not a vocal powerhouse like the legends from the era Kadavar is trying to recreate. He's also the band's guitarist, so those skills do make up for that.

"Last Living Dinosaur" is one of the album's singles for which band has made a video. It starts slowly and steadily but gains a heavier energy just before the vocals kick in. It's not as upbeat as "Lord of the Sky," and it has a thick Black Sabbath feel to it, with a hint of Blue Öyster Cult. Lindemann's singing improves a bit for "Last Living Dinousaur," as his style and cadence becomes imitative of a young Ozzy Osbourne.

While still very much retro rock, "Pale Blue Eyes" and "See the World with Your Own Eyes" go in a different direction, taking on a slightly earlier era. "Pale Blue Eyes" boasts electrifying intro riffs and has a fuzzy Hendrix vibe. It is rhythmic and catchy, and the chorus of, "Mysterious lady in you purple dress you look so fine / I want to have you by my side / Mysterious lady whatcha doing with your pale blue eyes? / I can't get you out of my mind," is memorable. The guitar solo in "Pale Blue Eyes" is fantastic, and it seems to be one of the most authentic moments on the album. Similarly, "See the World with Your Own Eyes" is super '60s. Right from the start you can hear the Rolling Stones influence, and it is also evocative of the Eric Burdon & War song "Spill the Wine."

"The Old Man," another single with a (fittingly pre-MTV looking) music video, is a wonderful re-creation of early metal. The repetitive guitar riff has the familiarity of Black Sabbath and Iron Maiden. I would consider it the darkest song on Berlin, and while the song is near perfect I have mixed feelings about Christoph Lindemann's often muffled voice meshing with the song. I would love to hear it be sung by someone a little more sinister. An Alice Cooper or Ozzy type would fit well with the darkness of "The Old Man". Lindemann might want to revisit his vocal performance on "Last Living Dinosaur".

Finishing out Berlin is the rapid rocker "Into the Night". With its heavy drumming from Christoph "Tiger" Bartelt, this track pays tribute to the pre-thrash proto-punk of Iggy & The Stooges and The MC5. "Into the Night" slows down toward the end, making what was once a brash garage rock song much more melodic. This serves as a good transition to the bonus track, "Reich der Träume."

Originally by Velvet Underground/Andy Warhol collaborator and heroin chic fashion model Nico, "Reich der Träume" is the only song on Berlin that is in German, despite the fact that the band is German. It is ethereal and contains space age electronic sound effects. Although the rest of Berlin is so guitar heavy, a fuzzy hard rock guitar only makes a brief appearance in the middle of "Reich der Träume". However, the bass is so deep in parts you can practically feel it rattle your chest.

Berlin seems to be less blues-based than Kadavar's previous offering Abra Kadavar, and the band is bent more toward a fuzzy, weighty, garage rock sound. The vocals were better on the last record, as they were stronger and more soulful, and the lyrics could be heard a little more clearly. The abundance of solid, prime hard rock riffs make that easy to overlook. I personally like when Kadavar leans toward the Sabbath end of the spectrum, but I can appreciate that they do not necessarily stick to one facet of the '60s and '70s period of heavy rock 'n' roll.

Posted by RockMaidenBritt at 10:28 AM