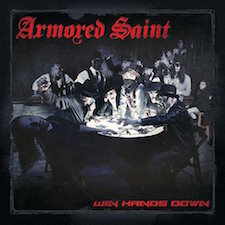 Despite being together since 1982, Armored Saint does not have the most expansive discography in metal. With members' equally notable projects, such as John Bush's tenure with Anthrax and Joey Vera having been in Fates Warning since 2000, when do they find the time to make it happen?  It's been five whole years since Armored Saint released La Raza, but the wait for more has been worth it. Win Hands Down, the band's seventh studio album, is an onslaught of classic metal sound mixed with some less-than-conventional aspects and emotional revelation.

Win Hands Down begins with the lead single and titular track, "Win Hands Down". It has a strong bass line from Joey Vera, particularly in the intro. The bridge sees some ethereal prog rock influence, but the song goes back to pure metal by the end. With its hard and heavy riffs and John Bush singing a catchy and inspirational chorus of ‘Just maintain / then drop the reins / and place my crown / win hands down,’ this song is everything you could want from an album opener.

"Mess" follows and is another hard rocker, but it is a bit more experimental. It has a mostly thrash feel, especially when ‘annihilate!’ is chanted. Then, out of nowhere, it goes into a Middle Eastern style, then transitions back into full on metal after the first chorus.

Also in unadulterated metal fashion is "That Was Then, Way Back When". It features a classic Iron Maiden style galloping bass riff throughout. The guitars rage heavily, and there is a fun groove in the middle followed by a blistering guitar solo. The lyrics are quite novel for a metal song, as they are about reliving the glory days of youth through social media.

Win Hands Down has its share of slower, more thought-provoking tracks as well. "Muscle Memory", at 7:14, is one of the album's longer songs and has lyrics about keeping on for your family's sake and leaving a legacy. It is far from fast, but it still has a certain heaviness to it. The bass is prominent, and Gonzo Sandoval's drumming is the song's steady backbone. "Muscle Memory" is an emotional vocal masterpiece from John Bush, and the considerable use of backing vocals complements this well. The guitar solo is good, and it adds the perfect amount of hard rock flavour to an otherwise serious song. "Muscle Memory" stands out among the other tracks from Win Hands Down, and it is definitely one of the best.

"In an Instant" also slows things down. Inspired by the tragic Boston Marathon Bombing, this song has an acoustic intro and verses--but turns to a fast paced electric rocker for the choruses. The lyric ‘The fragility of life / it can change within the blink of an eye’ sums up the theme. It features another great groove before an absolutely fantastic guitar solo. Just when you think "In an Instant" is going to end, it builds back up for another three minutes and contains another guitar solo that has a classic rock feel to it. Overall, this track probably has the album's best guitar work from Phil Sandoval and Jeff Duncan.

Win Hands Down ends similarly to how it began. The finale, "Up Yours", boasts John Bush's grittiest vocals so far over subtle guitar strumming. It quickly becomes raucous metal as a driving rhythm and heavier riffs are added in. The memorable ‘no more what ifs... no more what ifs...’ and kids shouting ‘up yours!’ make this song playful and nicely tongue-in-cheek after a few serious ones. The opener was so catchy, so it's only fitting that the closer is too.

With Win Hands Down, Armored Saint does not necessarily stick to any formula. On some tracks, the whole verse/chorus/verse deal goes out the window to make room for extra guitar solos and bridges. This album obviously has that Armored Saint sound that no other band has, but you can certainly tell the band is doing exactly what suits them. They do not worry about trends or critics, and Win Hands Down is a big "up yours" to those outside forces. Armored Saint knows how to stay true to themselves and can still deliver a product that fans will appreciate.