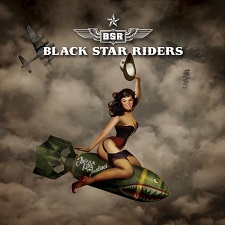 Ricky Warwick, Scott Gorham, and Damon Johnson are members of the recently resurrected legendary rock band Thin Lizzy. While they play shows featuring the classic Irish rockers' hits under the Thin Lizzy banner, they have also formed a band called Black Star Riders, under which the all band's newly written material is released. Robby Crane, who replaced Thin Lizzy's Marco Mendoza, joins them on bass, and Jimmy DeGrasso of Megadeth and Alice Cooper fame is on drums.

Black Star Riders' sophomore album, The Killer Instinct, was recorded in my home state of Tennessee and produced by Nick Raskulinecz. It was initially intended to be produced by Joe Elliott of Def Leppard--who helped launch lead vocalist Ricky Warwick's career--but he had to drop out due to his demanding Def Leppard schedule. The Killer Instinct is the follow-up to Black Star Riders' 2013 debut, All Hell Breaks Loose, which featured the successful single "Bound for Glory."

The Killer Instinct - which boasts a good mix of classic and more contemporary rock - kicks off with the title track, and it instantly has the twin guitar sound that made Thin Lizzy famous. It sounds a little bigger and slightly more modern, but it is still straight up classic hard rock. The chorus of "You gotta live with a killer instinct / You gotta die a little to survive / You gotta love with a killer instinct / You gotta hurt a little to get by" is catchy, and I like how they are a clever paradox that seems to make sense.

"Soldierstown", which is my favourite from the album, is also very much influenced by Thin Lizzy, and it has a lot of Irish musical influence as well. Ricky Warwick's vocals are muffled in the beginning, creating an interesting effect. "Soldierstown" has some fantastic NWOBHM guitar riffs and some rowdy backing vocals where band members chant "Tar a thighearna tar a thi". This is Gaelic for "come on thou Lord, come on thou being," and it fits well with the song's lyrics about mothers sending their sons off to war.

"Turn in Your Arms" is another track from The Killer Instinct that has the classic Thin Lizzy feel. However, it's got a very percussive Native American Indian sound in the intro, versus having the Irish element you might expect. The riffs get a little more contemporary as the song progresses, and it features one of the best guitar solos on the album. It is started by co-lead guitarist and Thin Lizzy stalwart Scott Gorham, then his counterpart Damon Johnson takes over. "Turn in Your Arms" lyrics contain themes of history, war, and the American Frontier, which really complement the music.

One of the more modern hard rock songs on the album is "Bullet Blues". It's one of the album's more memorable tracks, and I would love to hear it as the next single. The chorus, "Oh Lord help me and my bullet blues," is sure to get stuck in your head and make you want to hear more. "Bullet Blues" features great guitar solos from both Johnson and Gorham.

"Through the Motions" also takes the band in more of a modern direction. I absolutely love the main riff. It is highly memorable, and so is the chorus--"Do you / Do you ever get the notion? / Cuz you're / Cuz you're just going through the motions." It's gritty and aggressive, and it has a blistering guitar solo from Scott Gorham. Another gritty track in the same vein is the hard and heavy "Sex, Guns & Gasoline". The raw lyrics tell the stories of people with tragic lives and in bad situations.

The Killer Instinct is a solid album, and Black Star Riders are a really establishing themselves as a perennial rock band. The Killer Instinct boasts a delicate balance of the classic Thin Lizzy-inspired sound that these guys bring to the table mixed in with the more contemporary rock component. I have been following and enjoying vocalist Ricky Warwick's career ever since he opening for Def Leppard as a solo artist. He has breathed new life into the Thin Lizzy legacy and taken them into a new direction with Black Star Riders that is brand new while still respecting that legacy.