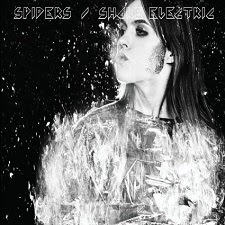 Following their 2012 full-length debut Flash Point, Gothenburg band Spiders have put forth their latest album, Shake Electric, and continue to offer their vintage hard rock sound. Some bands that go the throwback route will often sound contrived or the whole thing will even be a joke. This is not the case with Spiders and Shake Electric. They are about as authentic as it gets.

As soon as Shake Electric takes off, you are instantly transported to the 1970s. "Mad Dog" opens the album, having an early KISS vibe that meets the raw power of Iggy & the Stooges attitude laden garage rock. The riffs are great, and the sultry vocals from Ann-Sofie Hoyle are immediately appealing. "Mad Dog", with its unusual (or strangely translated) lyrics about being chased by some kind of aggressive whoremonger, isn't the best song the album has to offer, but it does give listeners a glimpse of what Spiders are all about.

Title track "Shake Electric" is a fun song about being young, having a good time, and wanting to stay in that moment with the person you're with. The clapping during the guitar solo adds to the fun, as does the catchy chorus of "Never never never never get enough of you". The harmonica solo at the end gives the song a nice touch of blues at the end.

"Bleeding Heart" is one that really stands out on Shake Electric. I could imagine it as a hit radio single in the late '70s or early '80s when Joan Jett, The Pretenders, and Blondie were cranking out hits. The guitar solo is probably the best on the album, and you can really hear the KISS inspiration there.

"Back on the Streets" and "Control" are in the same vein as "Bleeding Heart". I hear a major Pretenders influence on these two, but they're definitely heavier. I especially like the "Control" chorus with the memorable repeated lyrics of "Calling out her name, calling out her name." It has Chrissie Hynde written all over it, but Hoyles does it effortlessly. This song particularly drives home Spiders powerful female-fronted rock that is ass kicking and sexy all at the same time.

A surprising track from Shake Electric, at the end of the album, is "Hard Times". It is a ballad with soulful guitar riffs from John Hoyles. The lyrics are about not hiding your feelings and facing your fears. Ann Sofie's vocals are especially intense and emotional on this one.

Shake Electric is a perfect homage to late '70s and early '80s rock 'n' roll, and Ann-Sofie Hoyles pays great tribute to the powerful front-women that came before her. Spiders' sound is somewhat polished, but you can still hear a lot of raw intensity in their sound. Shake Electric is a phenomenal album, and I would highly recommend it for fans of heavy '70s rock and are also looking for something new.

Posted by RockMaidenBritt at 1:25 PM