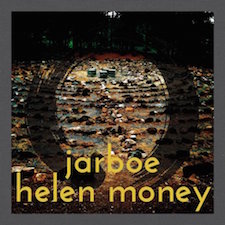 Ex-Swans vocalist and keyboardist Jarboe has joined forces with experimental cellist Helen Money to create a self-titled EP, Jarboe & Helen Money. Money (also known as Alison Chesley) is not your typical rocker, but her style of playing is often referred to as "doom" since it has a dark, doom metal flavour to it. She has also contributed to albums by metal artists, including Megadeth and Disturbed.

Jarboe and Helen Money begin their EP with "For My Father". A slow song, it starts with a dark, looming cello. The vocals from Jarboe are distorted, and she is difficult to understand in parts. The lyrics contain themes of justice and inequality. There is heavy use of an echoing effect on the vocals, and the song's final words "embrace amnesty" echo and bleed into the next track.

"My Enemy My Friend" is an instrumental in which Helen Money embraces the plucking of the cello, which is prominent in the beginning. A piano and the use of the bow--layered with the plucking--join later. There is also a lot of use of electronic distortion. This unorthodox style also comes up in the pieces "Wired" and "Truth". The former is fuzzy and distorted with piano and a dissonant cello. It is mostly an instrumental with only some sung "oohs" and "ahhs." "Truth" begins with breathy "ahhs" and piano, and the strumming of the cello is prevalent. This one has words--repeated lyrics about "the moon and the sun and the truth."

"Hello Mr. Blue" is the pinnacle of Jarboe & Helen Money. The intro features heavy bass-like plucking of the cello, and a low "woah" begins that permeates the song for the duration. A bowed cello kicks in with Jarboe's singing of the lyrics. The vocals are clear, and the lyrics are the most memorable from the EP. Distortion of the music, along with sheer heaviness in the cello, gives "Hello Mr. Blue" a fuzzy, grungy rock sound. The song is interesting in a good way, but the grunts at the very end are a little off-putting.

The final track from Jarboe & Helen Money is "Every Confidence" which relies heavily on the electronic distortion. It contains a lot of what might be considered "noise," but with some traditional bow played cello notes mixed in.

Jarboe and Helen Money's collaborative debut is not metal, nor does it pretend to be. Singer Jarboe's roots are in rock music, and Helen Money's cello playing definitely has a doom metal intensity to it. The song "Hello Mr. Blue" is certainly worth checking out, and I would absolutely love to hear it in a horror movie or something similar. The union of Jarboe and Helen Money is an unconventional one, but those who are looking for something highly experimental and strangely dark may very well appreciate it.


Posted by RockMaidenBritt at 12:38 PM