KISS' latest offering has its high points, but does it live up to its predecessors? 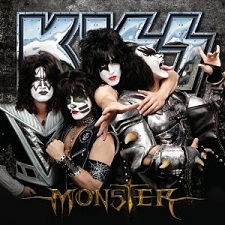 KISS just reached a major milestone in their career--the release of their 20th studio album, Monster. It certainly stays true to the band's signature sound, and it pretty much picks up where 2009's Sonic Boom left off. Monster was produced by Greg Collins and Paul Stanley, who also produced Sonic Boom.

"Hell or Hallelujah" is the album's opener and the lead single and it has the classic KISS sound right from the start. Paul takes on the lead vocal duties on this track, and his voice sounds like it is in great shape, not in the least bit strained as it has in recent times. The chorus is catchy, and the riffs are heavy. "Hell or Hallelujah" features a great guitar solo from Tommy Thayer. This relative newcomer to the band really fits in and sounds like he's been there all along.

Monster's first track with Gene Simmons on vocals is "Back to the Stone Age". It has a heavy bass intro and is very much a Gene song. The chorus is rather cheesy, but what would you expect from a song about returning to the wild and free days of being a caveman? Gene would have probably made a good caveman, so it actually makes sense!

Another Gene song from Monster is "The Devil is Me". It's darker and heavier than "Back to the Stone Age"--and an overall better song. I really dig the sinister attitude of this track. "The Devil is Me" is no "God of Thunder" by any means, but it's pretty cool.

"Shout Mercy" is one of Monster's heavier tracks, and it really reminds me of something from the band's Creatures of the Night era. I'm a sucker for good backing vocals, and this song is no exception. I really enjoy the shouts of "ooh hoo", "alright", and "mercy" in the background. The guitar riffs from this track are great and certainly have the classic KISS feel, and along with "Hell or Hallelujah", it's the best song from Monster.

"Outta This World" is a fun rock song that features guitarist Tommy Thayer on vocals. It's not one of the best songs from the album, but it did raise an eyebrow. The first verse of this track mentions feeling out of place in the human race and "wasting my time looking for my kind", and the chorus mentions a "midnight rocket ride". These lyrics just might touch a raw nerve with hardcore fans because they seem to have such a forced Spaceman theme. Tommy is definitely more of a singer than Ace has ever been--which is this track's redeeming quality--but this song just does not scream KISS at all.

"Last Chance" is the appropriately named last track on Monster. Paul Stanley sings lead on this song, which has the most classic sounding riffs on the whole album. The intro sounds very much like it was inspired by "Deuce". There are some really cool moments where the bass line gets extra heavy. I've always said Gene Simmons is an underrated bassist, and I enjoy his playing style--particularly on this track. Along with this great bass playing, this track also features the most explosive and impressive guitar solo from the whole album.

Monster may have a few good songs on it, but not many truly stand out. It was difficult to pick my favourites because of this, but there were some songs that grew on me more than others. Some of the songs may be catchy enough to get stuck in your head for a few days or even weeks, but they're not necessarily good enough to be remembered for years like much of KISS's previous work. I did appreciate the fact that the band embraced their classic sound, but the substance of the songs just wasn't all the way there. Monster is not at the top of my list of favourite KISS albums, but it's a decent record with some fun moments.