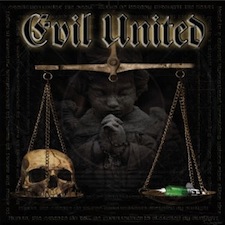 According to Evil United's Facebook page, they "will definitely quench the thirst on you heavy metal pallet [sic] and make you wanna gargle nails and then spit them out with AK-47 intensity impaling non-believers!!!". After listening to the band's self-titled metal offering--especially the powerful guitar riffs--I'd say that it's a pretty accurate description.

Evil United opens with the track "Blasphemer". The song begins with a mysterious sound effect, but the guitars and drums kick in right away. Evil United certainly brings the metal, but the vocals were not at all what I expected. The singing was mostly high-pitched, throaty screams. I was expecting something much lower, almost a growl. "Blasphemer" is very rhythmic and fast paced, which gives the song a thrash metal feel. The guitar work is fantastic, and although the solo is short, it really packs in the intensity.

"Speak" is slower than the opening track, but it is by no means a slow song. It begins with begins with lower, deeper guitar tones. When the vocals hit, they contain the high-pitched screams, but it quickly turn into more of a melodic singing style. Vocalist Jason McMaster's singing voice becomes much lower and is at times quite melodramatic. It almost sounds like two different people are singing on this track because of the great variation. "Speak" features another good solo--one with a bright power metal sound that really contrasts with the lower tones present in the rest of the song.

"Wargod" also features the varied vocal style from "Speak." The drumming is fast and heavy, and the guitars are, again, fantastic. It is definitely a thrash-inspired track.

"Fifty Year Storm" is preceded by the melodic instrumental "Dark Serenade". It is incredibly fast and heavy, and it really takes you by surprise because the brief "Dark Serenade" seems so calm. I quite enjoyed the vocals on this track. They're not too high in most of the parts of the song, and they seem to fit the musical style better. You can really hear the distinct lead and rhythm guitars working together here, especially during the intro.

Evil United's final track, "Hexorcism", begins with an almost demonic voice speaking the line, "I'm speaking to the entity inside of this child!". The screaming vocals hit, repeating the same phrase. The name is cool, like several of the other evil and "metal" sounding titles--"Dawn of Armageddon," "Walking to Sodom", among others. What I enjoy most about "Hexorcism" is that it boasts one of the longer guitar solos on the album. It is has a melodic power metal sound, which is a lot brighter than the rest of this deep, dark song. The contrast is fascinating.

Evil United has put together a very fresh, modern sounding debut album. One can really hear the influence of other metal styles such as thrash and power metal over the course of the record. I didn't really care for some of the vocals on this album. Jason McMaster's high-pitched moments kind of came across as a bad Bobby Blitz impression, but really throaty. The variation in his singing style was often distracting, and I couldn't quite tell what he was going for.  There were times when the vocals just didn't seem to complement the musical style. However, it was nice to hear something new and super heavy that didn't use a low guttural growl the ENTIRE time. Despite all of this, the top notch guitar work from TC "Bird" Connally and John "JV4" Valenzuela made Evil United completely worth my time spent listening to it. Now, I am rather anxious to check out their other band Pitbull Daycare to hear how their amazing talents match up with another vocalist.