The School of Shock Rock is Still in Session

The father of shock 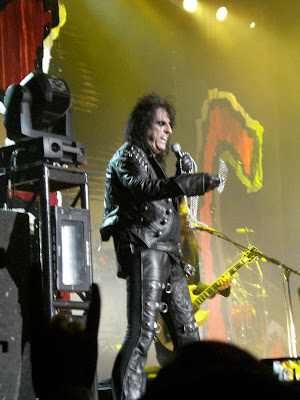 rock, Alice Cooper, and his 21st Century counterpart, Rob Zombie, spread their respective brands of horror and theatrics across North America as they embarked upon the “Gruesome Twosome Tour” in spring of 2010.

On Tuesday, May 18, the team played the Civic Coliseum in Knoxville, Tennessee. The show—which I attended with Lady Rock—was filled with stunning visuals, and of course, great music. Both performers certainly outdid themselves, and two things were proven that night—1. Alice Cooper still has it, and 2. Rob Zombie has filled some big shoes.

I was so happy to join the Rock Maiden at the Knoxville date of Alice Cooper and Rob Zombie’s “Gruesome Twosome Tour,” and I’m even happier to join in reviewing the show! This was my 11th Alice Cooper show, and as usual, this performance topped the others in its own ways. Alice himself was in incredible voice and expected energy, and ruled the crowd’s attention with an iron fist!

Alice Cooper has always been one of my favorite artists, and this wasn’t my first time seeing him live. He constructs setlists well—mixing the older material with the new, and giving the die-hard fans a deep cut. Having been performing since the late 1960s, one might guess Mr. Cooper would be a little worn out, never having taken a long break from recording or touring. That couldn’t be further from the truth.

This man just keeps topping himself! I’ve seen him from all different perspectives and distances. I’ve seen the secrets behind how he gets guillotined and hanged, but this night, Alice shocked me all over again! Killed FOUR times over the course of the show, and though I do hate to ruin any surprises, two of them were very recent sparks of genius. I’ll just say that one of them was particularly surprising considering how much Alice Cooper himself hates needles!

Alice jam-packed 22 songs into an hour and a half, but I’ll include just a couple of the highlights.

“Eighteen” has the very same inspired blues groove from its 1971 origin. It’s just as impossible not to fall into a slow head sway until our leader starts to yell, “I’m EIGHTEEN!” and feel just as angsty as the song implies. This song was simple evidence that Alice’s legacy isn’t going anywhere.

The highlights of every Alice Cooper concert I’ve been to have always been the deep cuts he’ll resurrect! Other die-hards in the audience and I were thrilled to death that he played two songs from his From The Inside album, “From The Inside” and “Nurse Rozetta.” His costume for these songs included an appropriate nod to Brian “Renfield” Nelson, Alice’s personal assistant and close friend who passed away unexpectedly last year. Alice wore a t-shirt reading “Renfield Nelson Asylum.”

To accompany the usual, surprisingly heartfelt “Only Women Bleed,” Alice also brought out a second ballad: “I Never Cry,” which he’s been doing on and off in recent years. The twist? Our hero sings while dressed in drag and with a noose around his neck. And this was Alice’s vocal high point of the night. I don’t know if I’ve ever heard his voice so strong and clean while on stage. And just as he wound everyone into a frenzy of “you know, you know, you know, I never cry,” the trapdoor of the gallows dropped out—

“I Love The Dead” is precisely where Alice’s backing band needs to be recognized. Alice plays with only the best, and though I miss many of those that have moved onto different projects, his lineup supports him better than ever! Damon Johnson (guitars), Keri Kelli (guitars), Chuck Garric (bass), and Jimmy DeGrasso (drums) are not only accomplished musicians but also excellent singers. “I Love The Dead” lay on Chuck’s shoulders, and that man does NOT disappoint… I think the Rock Maiden would agree with me that Chuck is pretty fantastic…

This tour truly represents a passing of the Shock Rock torch, but I’ll let the Rock Maiden give her official metal opinion of the Zombie that rises. I must say though that I never expected Rob to be so much like Alice. His innovations are just as genius and he commands his audience just as thoroughly… how else could I have been unable to take my eyes off a man whose hair looks like he’s been going through my garbage for a week?

Like Lady Rock, I had seen Alice Cooper in concert before, so I was quite familiar with the theatrical shock rock genre. However, I wasn’t sure what to expect from Rob Zombie. I have been a casual Zombie fan for quite some time, so I had never seen him perform live. 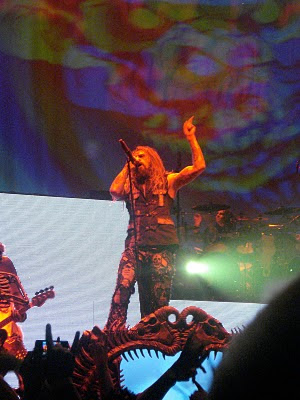 Rob opened his set with “Sawdust In the Blood” from his 2006 album Educated Horses. This surprised me because I thought he would have begun with something from his latest album, Hellbilly Deluxe 2, or a well-known hit. The second song, “Call of the Zombie,” was when Rob really started moving around the stage and utilizing the space.

A major visual highlight of Rob’s set was when he played a favorite from his White Zombie days—“More Human Than Human.” During the performance, a gigantic robot (the subject of the song) moved around the stage in a slow and menacing manner. Plus, hearing the lyrics, “I am the Nexxus One / I want more life / Fucker, I ain’t done, yeah!” could never get old!

Three-quarters of the way through his set, Rob turned the stage over to his equally talented band. Drummer Joey Jordison (also of Slipknot) played an elaborate solo, and guitarist John 5 lit up the stage with his breathtaking guitar solo. Without a doubt, John 5 is the most amazing guitarist I’ve ever had the pleasure of seeing perform live.

Rob closed the first portion of his set with another White Zombie tune, “Thunder Kiss ’65.” This song is best played live because the lyrics become even more slurred together and unintelligible. All you can hear is “Nineteen sixty fiiiiiive… yeeeeah!” and the crowd still goes nuts for it every time. It’s a fun song, and the Kool-Aid Acid Test-inspired background on the stage really added to it.

Zombie closed his show with two encores—with two songs each. The first encore, “Werewolf Women of the SS,” opened with a fake trailer that was featured in the film Grindhouse. Rob and his band completed this spectacle and raised some eyebrows by appearing onstage in long red coats that were similar to Nazi regalia.

What I really enjoyed about Rob’s setlist is that he did an excellent job layering the hits with the new material. Following “Werefolf Women” was the ever-popular “Dragula.” Both that and the recent hit “Sick Bubble Gum” elicited a huge pop from the audience. It was during these encores that Rob surprised us by running out into the crowd with a video camera. He announced he was filming us for a video.

Rob’s grand finale was the most spectacular of all. He ended the show in the same exciting way it started. He received the torch that was passed to him by the Shock Rock God Alice Cooper. He performed his own rendition of the classic “School’s Out.” It was just as energetic and angst-filled as the original, with some unique Zombie flair added to it.

This entire show made me realize how well Alice Cooper and Rob Zombie compliment each other—even more so than I expected. Their shows are similar, but Rob does not come across as a rip-off. Both rockers have run with the idea of placing a huge emphasis on the visual elements of their shows while the music is never compromised.

Both Alice Cooper and Rob Zombie have the power to give their audiences goosebumps and shivers in the middle of a sunny afternoon, and their performances have my heart beating just as hard as the first time I saw Michael Myers’ first murder!


(Note: All words in italics were written by Laura "Lady Rock" Rogas.)
Posted by RockMaidenBritt at 11:43 PM