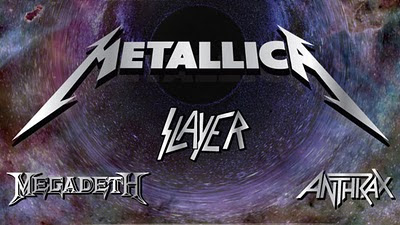 A show like no other hit hundreds of theaters on June 22, 2010. The four most influential bands of thrash metal played the Sonisphere music festival in Sofia, Bulgaria, and the event was broadcast to cinemas around the world.

The Big Four—Anthrax, Megadeth, Slayer, and Metallica—shared a stage for the first time ever. Not only was this a dream come true for metal fans everywhere, it was surprising that these bands could come together because of a handful of issues that could have easily gotten in the way. For instance, who knew that after 27 years Dave Mustaine of Megadeth and his former bandmates from Metallica would work through their animosity and play a show together? Also, Anthrax has had a big question looming over them for a few months now--Joey Belladonna or John Bush?

Anthrax, who were recently reunited with lead vocalist Joey Belladonna, opened the Sonisphere show with “Caught in a Mosh.” As soon as they started playing, I could tell Anthrax is a band that’s still “got it.” Their energy was great, and I was very impressed with Belladonna’s vocal abilities. (I will say that he now looks about 15 years older than all of the members of Anthrax combined. His long hair worn in an outdated style makes it worse. This was just the first thing that came to mind when I saw him.)

Anthrax continued their set with their hits “Madhouse” and “Got the Time,” but the biggest highlight of all was their tribute to the late Ronnie James Dio during “Indians.” At the bridge, the band began to play part of Black Sabbath’s “Heaven and Hell.” This was an emotional moment (almost tearful) for me, because “Heaven and Hell” is my all time favorite metal song.

Megadeth took the stage next, and they opened with “Holy Wars.” I had the pleasure of seeing Megadeth in concert last November, and I was definitely curious to see them again after bassist (and co-founder) David Ellefson returned to the band after an eight-year absence. Other than hearing some weakness in Dave Mustaine’s voice on occasion, their set was fantastic and solidified the reason why this band was the one I came to see. Chris Broderick is a fantastic guitarist, and I absolutely love watching him play onstage.

Megadeth’s set featured several of their biggest hits such as “Hangar 18,” “Sweating Bullets,” and “Symphony of Destruction.” The band also played “Head Crusher” from their latest album End Game. However, their final song “Peace Sells” elicited the biggest response from the crowd of thousands of Bulgarian metalheads. They shouted the words to the song’s memorable chorus “If there’s a new way/ I’ll be the first in line” right back to Mustaine with incredible energy and feeling.

Slayer followed with their opener, a new single called “World Painted Blood.” Without a doubt, Slayer is the heaviest and angriest of the Big Four. And also, unfortunately, I know the least about them. I honestly have never been much of a Slayer fan. Please don’t take away my metal card yet! I think Dave Lombardo is an incredible drummer, probably one of the best ever. The rest of the band is very talented, and with songs such as “Mandatory Suicide” and “Hell Awaits,” it is no wonder why metal fans are so captivated by Slayer and their songs’ subjects.

Going into this show, I thought I would have little interest in Slayer, but I actually enjoyed their set. I liked hearing “Raining Blood” performed live and seeing the crowd’s reaction to the legendary track. I also discovered that Slayer is quite a visual band, especially guitarist Kerry King who sports a unique look with his pattern of tattoos and porcupine-inspired wristband.

Metallica, who is arguably the biggest of the Big Four, closed the show. The pickiest of thrash fans will be happy to know that Metallica’s setlist was comprised mostly of “pre-Load” songs. They opened their set with “Creeping Death” from my favorite album of theirs Ride the Lightning. The audience—both at the festival and in the theater—seemed ecstatic to hear that opening riff to such a classic thrash song.

The band continued their set with “For Whom the Bell Tolls,” “Harvester of Sorrow,” and “One.” Audience members in the theater even got out their lighters (dangerous, but cool) for their beautiful rendition of “Fake to Black,” which was my favorite of Metallica’s set.

Due to a technical difficulty at the Knoxville, Tennessee, movie theater where I attended this concert broadcast, my viewing of the Big Four was cut short. At the end of “Enter Sandman,” which is probably Metallica’s biggest hit, the movie screen went black. (Irony!!!) The extremely unhappy audience yelled things like “this is bullshit!” at the projector booth. Most everyone, including myself, got out of their seats and proceeded to leave because it appeared as if the show was winding down anyway. It was already past midnight at that point, as the theater was late getting the show started. It was supposed to begin at 7:30, and all of us rockers were subjected to horrible elevator music for nearly an hour before the metal madness began.

Apparently technical difficulties weren’t exclusive to the Knoxville showing of the Big Four concert special. While I was waiting impatiently for my show to start, I saw the post on radio host Eddie Trunk’s Twitter page saying “Sound and power out during my screening. Metal fans not happy!” followed by, “Rockaway NJ just had power outage and cleared the theatre in the middle of Anthrax set. That's all I'm getting of Big 4!” Luckily, there was an encore presentation on June 24th, and I hope Mr. Trunk made it to that one.

Due to the screen glitch and my leaving early, I missed what had to be the most epic moment of the Big Four at Sonisphere. Members of Anthrax, Megadeth, and Slayer joined Metallica onstage to perform Diamond Head’s “Am I Evil?” Because of the magic of YouTube, I fortunately got to see the performance later on. Before the bands started playing, they greeted each other with hugs and handshakes. Even Dave Mustaine and members of Metallica seemed genuinely happy to be sharing a stage.

"Am I Evil?" kicked off with killer riffs courtesy of Kirk Hammett, and the guitarists of Megadeth and Anthrax soon joined in. All the bands' drummers pounded away (Dave Lombardo was the only Slayer member present for this) while James Hetfield, Dave Mustaine, and Joey Belladonna took turns singing.

"Epic" is the one word that comes to mind when describing this scene. I just can't imagine what it was like for the audience members in Bulgaria who were witnessing this legendary coming together of metal gods.

After the Big Four finished "Am I Evil?" Metallica resumed their set and finished it with "Seek and Destroy." It's almost easy to forget that Metallica had a continuation of their set because of the epic meeting that had just taken place. Since it was such a big deal, maybe they should have saved "Am I Evil?" for a grand finale. Despite this, I think Metallica did an excellent job of blending in with the other bands, even with their obvious commercial success and overwhelming popularity.

Theater experience aside, I am thrilled I was able to attend the screening of the Big Four concert. It was exciting to see Anthrax, Megadeth, Slayer, and Metallica share a stage. Each of these bands is unique, but they have one thing in common-- they are all originators of thrash metal. Like most fans, I am hoping for a Big Four tour, and I certainly can't wait to see the DVD and relive this moment in music history.
Posted by RockMaidenBritt at 9:47 PM