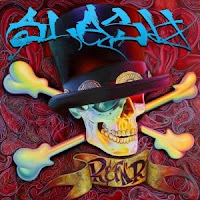 After major success with the bands Guns N' Roses and Velvet Revolver, guitar god Slash has released what is considered to be his first ever solo album, simply titled Slash.

When I first learned of this new album, many questions ran through my head, "How will this work?" "Will it contain mostly instrumentals?" "Will Slash be singing?" "Is he putting together a new band?" As a huge fan of both his bands (Guns N' Roses were the band that got me into rock music. I owe them everything), I became both excited and curious about the release of this album.

As it turns out, Slash features a guest vocalist on each song of the album. A variety of singers were chosen as well--both rock icons and pop chart toppers. Not only did they lend their voices to this album, they also lent their songwriting skills. Former Guns N' Roses members Steven Adler, Duff McKagan, and Izzy Stradlin also contributed to select tracks. Dave Grohl plays on an instrumental as well.

The lead single from Slash is "By the Sword," and it features Andrew Stockdale of Wolfmother on lead vocals. This song starts out slowly with some acoustic guitar riffs, then it completely rocks out in full Led Zeppelin fashion. Stockdale somehow belts out the dark and mysterious lyrics in a way that is reminiscent of Robert Plant. He even accents and enunciates his lyrics like Plant. Slash's guitar playing is phenomenal, and the tone he plays with really gives the song a vintage feel.

"Crucify the Dead", which is sung by Ozzy Osbourne, is a rock royalty spectacular. Even at first listen, I realized how unique it was to hear Ozzy sing to Slash's guitar playing. After hearing the brilliant guitarists Randy Rhoads and Zakk Wylde play with Ozzy over the years, I was impressed by his and Slash's collaboration. These are two legends that are even better together than they are when separate. "Crucify the Dead" sounds like it could make the cut of an Ozzy album, and Slash's amazing guitar solo complements it well.

The track that immediately follows it seems unlikely on the surface, but it gives Slash the variety that makes it so great. "Beautiful Dangerous", which is sung and co-written by popstar Fergie, gives her credibility as a singer and a songwriter. It also showed Slash's versatility and willingness to work with artists outside of the hard rock world. While "Beautiful Dangerous" is not something you could bang your head to, it is a sexy, sultry, and upbeat pop-rock song.

"Nothing to Say", featuring M. Shadows of Avenged Sevenfold is nothing short of pure rock energy. It is hard-hitting, and there is something still very melodic about it. I feel that it is the heaviest song on the album, and it features Slash's fastest playing and some powerful and gritty vocals.

Myles Kennedy (currently of the band Alterbridge), gives his voice to two tracks--"Back From Cali" and "Starlight." He brings a very soulful and emotional componet to this album that fits well with Slash's playing style.

"Back From Cali" is a catchy (and I mean CATCHY) song about being ditched by your woman after partying it up in the Sunshine State. This song is sure to become a hit on modern rock stations in the near future.

"Starlight", the second Kennedy number, is an absolutely beautiful song with a country/blues vibe. The lyrics tell the story of a relationship's uncertain future but from an optimistic point of view. Kennedy's voice is killer in this song, and he sounds identical to Lou Gramm of Foreigner during the bridge. Slash's solo toward the end is fantastic and crystal clear.

I believe Myles Kennedy's outstanding performances are the major highlights of this album, and there is no wonder why Slash selected him to be part of his live touring band. However, there are other vocal contributions that cannot go unmentioned. Ian Astbury, Lemmy Kilmister, Adam Levine, Rocco DeLuca, Iggy Pop, Chris Cornell, and Kid Rock all lend their voices to Slash.

This entire album proves that Slash is a relevant musician who can achieve success and popularity in the year 2010--even after not having been in Guns N' Roses since the mid-1990s and the uncertainty that is always facing Velvet Revolver. His debut solo record contains such an eclectic mix of great songs that keep it fresh with with each listen.

Posted by RockMaidenBritt at 8:23 PM