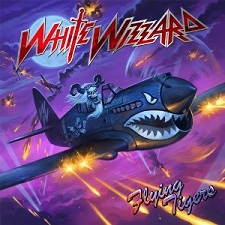 After numerous line-up changes, White Wizzard is back with their second full-length album, Flying Tigers. It features returning lead vocalist Wyatt "Screamin' Demon" Anderson who had previously left the band shortly after their first album Over the Top was released in 2010. Unfortunately, he left the band again in June after the new one.

Flying Tigers is filled with a retro metal sound that is neither cheesy nor contrived. It is full of sounds that sound like they are from hard rock's heyday in the '80s without being too over the top. The album's first half stays true to this, while the latter shifts into a more progressive style.

Album opener "Fight to the Death" introduces White Wizzard as a band that isn't going to take shit from anybody. The first line starting out with "Don't preach to me..." is the perfect way to begin this song about being free to choose your path and not having religion and beliefs forced on you. The rhythm of the intro riff seems very punk-ish, which threw me off at first, but the backing vocals at the bridge and the guitar solo add a nice '80s touch to the song.

The following track, "West L.A. Nights," is not as serious or rebellious as the opener. This one is all about fun--evoking images of denim, leather, and the L.A. Sunset Strip. The crisp, screaming guitar riffs and lyrics like "The Rainbow's rockin' / and the boys are ready to go," (Followed by an epic metal SCREEEEAM!) make this track the most nostalgic from Flying Tigers.

In the middle of Flying Tigers,  "Fall of Atlantis" leads the album into more of a progressive metal sound. The intro is fast and bass-heavy. The lyric themes begin to focus on a more mystical subject matter at this point, and the vocals become a lot more powerful. The drumming becomes heavier, and overall the riffs are faster.

The very prog instrumental "Dark Alien Overture" is even heavier on the bass, especially in the beginning. The first few times I heard it, I almost felt like I was listening to a Rush jam session. (It even has "Overture" in the title!) As "Dark Alien Overture" goes on, it gets heavier with more guitar being gradually added.

Flying Tigers, filled to the brim with '80s nostalgia, is a great album for traditional metalheads who want a slight taste of progressive metal with some power metal thrown in. It took me awhile to find many of the songs to be "catchy," but after awhile, the ones with the memorable choruses like "West L.A. Nights" and "Night Train to Tokyo" began to stick.

I am definitely into what White Wizzard is doing. The band's bassist, leader, and chief songwriter Jon Leon seems to really know how to pull off this "retro" thing and sound serious at the same time. I really hope this band can just get their shit together when it comes to personnel issues so they can continue to put out more hard and heavy rock records like this one.