This rocker is Kicking & Screaming, and it should get him the attention he deserves 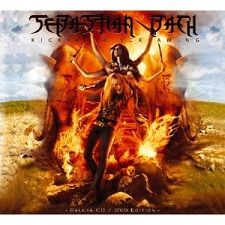 The album starts off with its eponymous lead single "Kicking &Screaming". It is surely a fantastic way to start the album, as it is everything you would expect from a powerhouse such as Bach... and more! The guitar riffs go great with Bach's voice on this song, the lyrics fit well with his in-your-face personality, and it's really just an overall fantastic rock song.

The next track, "My Own Worst Enemy", is another heavy rocker. The vocals are highly theatrical, and Sebastian really explores his vocal range on it. The kick ass riff between the verses comes courtesy of Bach's guitarist Nick Sterling, who consistently does a great job on the whole album. The catchy chorus to "My Own Worst Enemy" almost has a power-pop feel to it, but it's still hard hitting.

"TunnelVision" features the work of eccentric guitar god John 5. It briefly starts out light and slow, but it instantly gets hard and heavy like most of the other tracks from Kicking & Screaming. Sebastian Bach makes use of his lower vocal range through some of this song, and steps up higher for the second verse. At this turning point, it's one of only a handful of moments that really sound like a Skid Row song. The gritty vocals leading into a killer scream after the second chorus and the exquisite John 5 guitar solo make this one of the more memorable tracks on the album.

The highly aggressive "Dirty Power" is autobiographical--it pretty much describes the reputation Sebastian has for being a notorious bad ass who's loud, explosive, and even getting himself into trouble. The nuance he adds to the ends of select words in this song adds an even more aggressive tone, as does the interesting groove during the bridge.

My favourite track from Kicking & Screaming has to be "Dream Forever"--which tells a tale of not wanting to live forever, because there is a certain peace that comes with being finished. It is heartfelt, emotional, and sincere, and it shows a more serious side of Sebastian Bach that rock fans generally don't get to see. He sings the lyric, "Think of all the things I could have been / just before I close my eyes", with such conviction! This song is very climactic, with the bridge of it being the most intense.

Another ballad of sorts is the album's finale, "Wishin'." It is somewhat slower than the previous one, and it is unusually sweet for something that's come Sebastian Bach. It has an acoustic intro and much softer vocals than any of the other songs from the album. In fact, Sebastian is nearly unrecognizable during the first few bars. It's a nice peaceful closer for an album that starts out so fiercely.

All in all, this album is great--It sounds current without trying too hard, and Bach's legendary vocals and his rock star attitude aren't forced either.

As I've said before, there are only a handful of times where it absolutely sounds like Skid Row. Bach's trademark vocals were a major part of Skid Row's sound and will always be a part of their legacy, so it would be nearly impossible for there to not be traces of the band's sound on this record. I thoroughly appreciate the fact that Kicking & Screaming is not an imitation Skid Row album--which is something that can unfortunately happen when a lead singer from a band goes solo--this album is truly Bach's own.