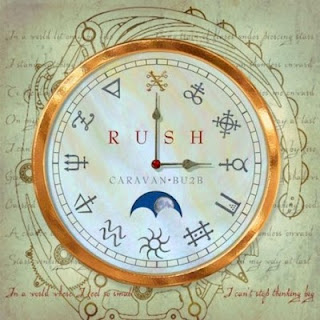 Toronto rockers Rush have released two brand new tracks this summer from their forthcoming album Clockwork Angels. The album itself isn't slated for release until spring of next year, but the band has given fans new material to tide them over until then.

The single's B-side "BU2B" (because we all know Rush likes to letter and number songs) is a track I actually fancy a bit more than "Caravan" because of its slightly heavier heavier sound and faster pace. I think it sounds a lot like late '70s or early '80s Rush, so I'm a bit partial to it. I've heard "BU2B" on satellite radio a few times, and I think this song will really catch on with the rock audience and longtime Rush fans.

Both tracks are a nice sneak peek into the future Clockwork Angels album. If the rest of the songs are just as great as "Caravan" and "BU2B," which I have no doubt, Rush will have one of the biggest hard rock albums of 2011.
Posted by RockMaidenBritt at 7:41 PM