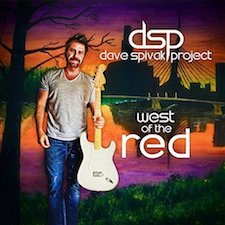 Although he currently lives in Calgary, Dave Spivak’s early life in Winnipeg and time spent in Traverse Bay create the backdrop for his album West of the Red. “Basically, I’ve been told it’s a very Canadian sound,” the singer/songwriter/guitarist says of the record produced at Bedside Studios by Winnipeg mainstay Len Milne.

One could also describe it as “heavy roots music,” and it does by all means get heavy.

West of the Red opens with the electric rocker “Breakfast for One.” Bluesy keyboards highlighting the guitar riffs add a nice late-‘60s-inspired touch. Spivak’s voice has the right amount of rasp and attitude to it, as he sings about a worn out relationship that needs to be put out of its misery. Lyrics like, “We drove that crooked ditch ‘til the bottom fell out,” set the tone for West of the Red. Others such as, “I’m not riding that Gravitron / Not this or any year,” show Dave’s sense of humor.

The humor fades during West of the Red’s second track. "Get Outta My House" is dark, ominous, and deeply personal. The layers of electric and acoustic guitar blend well to create a chilling vibe. The main electric riff is memorable, and the solo—which is a total jam—really builds on it. The lyric, “The ghost in her face told me that I should run / But I stayed too long the way always do,” perfectly captures the feeling of looking back at all the red flags in a long-term relationship.

The fun returns for “Ran Outta Money.” This one is upbeat, with a country blues feel to it. The idea behind it is quite clever. It’s about a guy who hasn’t completely given up on his partying and rockstar dreams—he’s just had to stop and get a dose of reality for a while. Spivak delivers the lyrics almost in a spoken word fashion, like he’s chatting at a bar, “And I’m down on 59 / Broken roads and doin’ time / Still tryin’ to find the way of the ordinary…” A music video for this track stars producer Len Milne as a lovably goofy camper, while Dave takes on a more chill role wandering and contemplating lyrics like, “Why do I walk these Traverse Bay roads / Walk those roads alone?”

“The King is Dead,” which is built around a prominent acoustic guitar riff, proclaims, “Rock ‘n’ roll is dead / It’s just not for the people anymore.” It tells of a guy who has obviously fallen on some hard times, and going to a rock show seems unattainable. The backing vocals are cool on this one, especially the female sung harmonies that create a trippy turn at end of the chorus.

Heaviness and a harder rock sound creep back in with “Cold Empty Streets.” Slightly distorted vocals and some subtle feedback help set the mood for this one. Though it is never explicitly mentioned, the city of Winnipeg is captured by hints about “where the two rivers meet,” River Avenue, trains, bridges, and the bitter cold. The angry, vengeful lyrics paint a picture of a bleak place. The bass line is strong, and the bluesy rock guitar solo ties it all together.

West of the Red is an eclectic mix of roots rock ranging from the folkier end of the spectrum on over to the harder side. Dave Spivak’s experiences in Winnipeg, Traverse Bay, and beyond, have inspired meaningful, memorable, and authentic songs that are uniquely his.

The Dave Spivak Project is currently booking shows and performing in Western Canada. DSP will also be a special guest on Chris Jericho’s Rock N Wrestling Rager at Sea. Check out DSP on Facebook and Twitter.
Posted by RockMaidenBritt at 10:14 PM

Email ThisBlogThis!Share to TwitterShare to FacebookShare to Pinterest
Labels: reviews