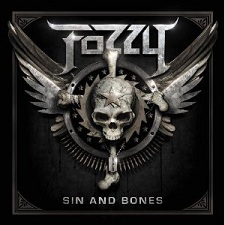 The words "growth" and "maturity" do not even begin to describe the musical partnership of Chris Jericho and Rich Ward. For a band that began its career doing mostly cover songs, Fozzy has exceeded critics' and fans' expectations alike by creating fantastic albums filled with solid original material.

Fozzy really started to gain a lot of momentum with the release of 2010's Chasing the Grail. From day one, it has absolutely been one of my favourite albums, if not my all time favourite. The band's musical talent and song-writing abilities--especially those of guitarist Rich Ward--could definitely not be questioned. But I kept asking myself this: "How could this album that I've been holding in such a high regard for the last two and a half years be topped?" The answer: Sin and Bones.

From the very moment I pressed play on Sin and Bones I was fascinated. The album's nightmarish opener, "Spider in My Mouth", begins with some creepy white noise much like a radio tuning in. Then suddenly, a music box starts playing the nursery rhyme "Itsy Bitsy Spider". As if it couldn't get any eerier, a child's voice singing the line, "Itsy bitsy spider crawled in my mouth again" joins the creepiness. Then the guitar hits, but it seems far away. The music feels like it is moving closer as it reaches its full volume. From beginning to end, the lyrics are macabre and graphic, describing a scenario fit for a horror movie. Musically, "Spider in My Mouth" is really heavy, especially during the verses. The choruses are much more melodic and very memorable. Jericho's vocals are powerful, and the guitar riffs are intense--complete with that signature Rich Ward growl. Frank Fontsere's drumming is absolutely thunderous--especially toward the very end. I can't imagine a better way to start an album!

Sin and Bones' lead single "Sandpaper"--which features guest vocals from M. Shadows of Avenged Sevenfold--comes next. Jericho's and Shadows's voices mesh so well that it is hard to tell where one ends and the other begins. This track cuts to the chase and is immediately heavy. It opens with the in-your-face chant of "A cat scratch / a whiplash / a witch hunt in black / SANDPAPER!" and the raging guitars of Ward and newcomer Billy Grey start to wail. This track is awesome, but it gets even better during the second verse. Jericho's emphasis on certain words keeps things interesting, and the bass line--courtesy another Fozzy newcomer, Paul DiLeo--is phenomenal. It is deep, heavy, and prominent, and it reminds me of something you'd find on KISS's Lick It Up record. "Sandpaper" features yet another one of the melodic choruses that Fozzy is known for, but this time, the notes come together in such a way that it briefly gives the song a prog metal-ish Dream Theater feel.

My favourite track from Sin and Bones is "Inside My Head". It's definitely not the hardest or heaviest musically, but this song--with lyrics about being trapped by unwelcome thoughts from a dark past--is deep and emotionally heavy. Chris Jericho's use of his lower register and the addition of more grittiness to his vocal performance really helps to further this song's darkness. Despite this perceived darkness, however, the chorus has a catchy rhyme scheme, and the bridge contains some Def Leppard-esque backing vocals.

"Dark Passenger" is one of two tracks co-written by Terry Chism, the singer for Rich Ward's Christian band, Walking With Kings. This song is also one that tells a story--one about being possessed and becoming someone other than yourself whom you despise. "Dark Passenger" begins with a piano and a subtle string arrangement. The sound becomes more layered as the guitar is added in. The opening line "Jesus is my co-pilot, or that's just what they say / but it's not the savior who guides me every day" conjures up religious imagery and introduces the theme of the possessed soul. The lyrics that lead up to the chorus, "Tick tock / it's only a matter of time," and they way they are sung really remind me of the song "It's a Lie" from the band's album All That Remains.

Sin and Bones ends with the eleven and a half minute "Storm the Beaches", also co-written by Chism. This finale is epic, not unlike "Wormwood" from Chasing the Grail. This is certainly not your typical verse/chorus/verse song. Actually, it's like a whole bunch of songs rolled up into one, but it all comes together and makes sense. "Storm the Beaches," as the title suggests, tells the story of a young soldier storming the Beaches of Normandy during World War II. The story is told in five acts, and it plays out much like a dramatic movie.

Because "Storm the Beaches" tells a story in acts, many different things are happening musically. The song begins with Chris Jericho reading the soldier's diary entry over piano. Soon after, the guitars hit, and the song becomes very hard and rhythmic. The vocals are rapid and extremely rhythmic as well.  In this aspect, the song is a lot like "Martyr No More" from Chasing the Grail. Like most of Fozzy's other songs, "Storm the Beaches" features a melodic chorus to accompany the heavy riffs. This song's  chorus really stands out, as it features the death metal-ish grunt of "first to go / last to know" followed by a bright and bombastic Children of Bodom-like keyboard arrangement. Another stand-out segment of this song is the mixture of woodwinds and the snare drum to create the feel of marching. I definitely see a trend here with Fozzy ending both Chasing the Grail and Sin and Bones on such an epic note, and I really look forward to what masterpiece they'll come up with for their next album.

Up until now, I didn't think Chasing the Grail could be equalled, but it certainly has. Sin and Bones is the perfect balance of heaviness and melody and classic and contemporary. It has been so thrilling to hear Fozzy develop their own unique sound and become what is now one of the great modern metal bands.