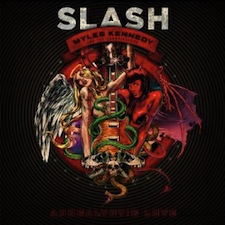 The wait is over for Apocalyptic Love--the much anticipated follow up to 2010's Slash. Rock and metal fans should remember this as the debut solo album which featured a wild array of vocalists, one being Alterbridge's Myles Kennedy. This time around, Slash has chosen Kennedy to sing on each of the 13 tracks. He also plays rhythm guitar with the band who has become known as The Conspirators.

The album's opener is "Apocalyptic Love", the highly sexy track with lyrics about spending the end of the world making love. A groovy "wah-wah" effect is present throughout entire song, permeating the guitar solo. The vocals are intense right from the start, as Kennedy sings in his higher register. This hard rocker slows down at the bridge, which offers an interesting change of pace.

"You're a Lie"--which is getting considerable radio airplay stateside--has the classic "Slash sound"--gritty but modern vocals, and plenty of attitude. The ultra heavy guitar intro is very suitable for Slash. Myles Kennedy's vocals start out lower, gradually get slightly higher in the chorus, and then return to low in verses. The song's lyrics about finally cutting somebody off who has wronged you and let you down really resonated with me and will touch a lot of listeners.

The following track, "No More Heroes", has an underlying riff that contains what I like to call the very noticeable "blistering Slash tone". On this song and many of the others Kennedy's vocals range from delicate to intense. "No More Heroes" is instantly memorable, especially the ends of the verses and how they lead into the chorus containing the lyrics, "when your heroes turn to the enemy".

One of Apocalyptic Love's standout tracks is "Halo". It has a guitar and cymbal-heavy intro that quickly turns into a real driving force. When the vocals hit, the song begins to sound like a big seventies rock production. It is full of attitude and immense energy, and when Kennedy sings in his higher register, the song is dramatic and captivating. I honestly believe this guy is the next Steven Tyler!

Slash switches to an acoustic guitar for the beginning of "Anastasia" but soon goes back electric. This track features blazing fast notes and high vocals. The chorus of "All my love Anastasia / Anastasia this could be our last goodbye" is extremely catchy and one of my favourites. The guitar solo on "Anastasia" is easily my favourite and also the longest. Those unique, lush tones sound like they could only come from Slash.

"Shots Fired" starts out slow and low, but it instantly becomes heavy and upbeat. It has a heavy rhythm guitar and bass line and yet another catchy chorus--one that would be perfect for a live crowd to sing along with. This aggressive, ultimately hard rocking track is a great way to round out the album.

Apocalyptic Love features the perfect matchup of Slash's legendary guitar playing and Myles Kennedy's fantastic vocal range. I am thrilled that Kennedy was selected to sing on this entire record, as the tracks he sang on 2010's Slash were arguably the best.

Slash is still heading in a great direction with Apocalyptic Love, and I really hope it continues. He is definitely making his mark outside of the Guns N' Roses realm and has released more new music, and most importantly higher quality music, than Axl or his other peers.

Posted by RockMaidenBritt at 10:24 AM