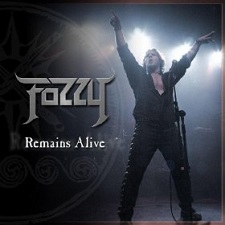 Fozzy's high octane Brisbane concert--which was recorded back in 2005 after the release of All That Remains--is finally available worldwide. Initially, only Fozzy superfans could get their hands on Remains Alive by purchasing the awesome and pricey "survival pack"--a plethora of Fozzy merchandise that would make even Gene Simmons jealous of this band's branding skills. Now this album--complete with a name that evokes the era of '70s live album greatness--can be found packaged with a special edition of Chasing the Grail and separately on iTunes.

Fozzy's live spectacular begins with the All That Remains album opener, "Nameless Faceless." It starts off with the low and heavy riff, and the audience goes wild! Fozzy frontman Chris Jericho briefly pumps them up, then shoots straight into the song. Right from the start, the band sounds fantastic, and the vocals are spot on and easily understood. (Side note: One of my biggest complaints with live albums is that the music can often overpower the singer, or the singer will just sound plain awful live. This definitely isn't the case with Fozzy.)

My favourite moment from Remains Alive is the band's live interpretation of their song "Crucify Yourself." I've always liked this heavy and powerful song from the Happenstance album, but it sounds even better live. The chorus is much more melodic in this version, and you can really hear the conviction with which Jericho sings it. "Crucify Yourself" contains what is sure to be Rich Ward's finest guitar playing on Remains Alive.

When Fozzy first formed, they were chiefly known for doing cover songs, and a couple of those made onto Remains Alive. One of these covers is the Judas Priest classic "Freewheel Burning." Metal fans everywhere would probably agree that it's pretty ambitious for a band to cover Priest--especially from a vocal standpoint. This song is very fast, has tongue twister-like lyrics, and it really requires the singer to fill some major singing shoes if it's to be done right. Fozzy successfully pulls this off without a hitch and without sounding like a Priest copycat. Jericho puts his own spin on the vocals, and he never sounds like he's struggling with the Rob Halford vocal acrobatics.

Fozzy has never been a stranger to comedy (Moongoose McQueen, anyone?), and Chris Jericho has never shied away from addressing a crowd. Remains Alive has the right amount of fun and engaging between-song banter--particularly before the band rips into the number "To Kill a Stranger". Chris Jericho addresses the crowd about how rock bands always leave the stage before the encore, but the crowd will keep cheering because they know the band will come back for more. With his humorous arrogance, Jericho insists that Fozzy will not leave the stage before their encore, but the crowd should cheer for them anyway. Fozzy's "encore" for Remains Alive is "Enemy"--the band's hit single at the time. Throughout the performance, the band sounds just as strong as they were at the beginning of the show. This nine minute long grand finale is moving and intense, and it leaves the audience cheering and begging for more.

Everyone who has seen Fozzy live always raves to me about the energy and intensity that radiates from them from the time they hit the stage until the they leave--without missing a beat. Remains Alive certainly proves this claim, and Fozzy's musical talent and showmanship are evident throughout the entire album.