Design the Skyline Debuts With "Nevaeh" 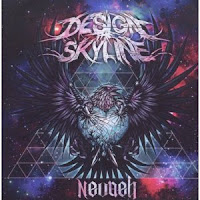 Design the Skyline debuts with ten new tracks... are they STILL the "worst band ever"?

I don't think I've ever Googled a band and found so much hate--then Victory Records signs Design the Skyline.

The experimental band from Corpus Christi, Texas, released a video earlier this year for their song "Surrounded by Silence" to a swarm of harsh criticism from metal fans and music bloggers all over. A columnist for a local indie newspaper The Portland Mercury even went so far as to ask the question, "Is Design the Skyline the 'worst band in the history of music'?" and followed it with, "[Their sound is] akin to the noise a litter of puppies would make if forcefully shoved through a wood chipper." Ouch!

The first song Design the Skyline unleashed onto the masses is not on their debut album Nevaeh, but I just had to watch the video for "Surrounded by Silence" to see what all the rage was about.

To even think about taking this song seriously, I had to listen to it without even making eye contact with the video. Design the Skyline has to be the most ridiculous looking band I've ever seen. The band members each had straight black emo hair (some with skunk stripes) covering at least one eye in a "the world is too cruel to look at" manner. The girly guys in their skinny jeans and neon colored accessories were just too painful to look at. However, the drummer was wearing a flannel shirt and had his long hair swinging all over as he pounded away. It was almost as if the band hired some random '90s grunge band drummer to stick out like a sore thumb. The band's look is beside the point, but it's definitely something Design the Skyline catches a lot of hell for.

The song in question begins with an electronic element, which the band uses heavily. Then the screaming vocals, pounding drums, and wailing guitars bring in a heavy metalcore flavor. It briefly sounds promising, then a whiny, melodic, Auto-Tuned chorus (well, it sounds like it's a chorus) kicks in. It's all downhill from there. The two vocalists begin to scream and growl on top of each other, and the electronics create what sounds like some bizarre techno metal remix. It's absolutely chaotic.

Now that I've seen and heard the worst possible thing that could come out of this band, it could get better--right?

"Crystal Swords Kill the Hordes" is the very metal sounding name of the album's opening track. It begins with beastly vocals that are surely not as whiny or screechy as the ones in "Surrounded by Silence." There is a heavy electronic element to the chorus, which is where the more melodic (but unfortunately pleading and whiny) vocals kick in. This stark contrast in vocals is due to Design the Skyline having two vocalists--Daniel "Dani Doom" Garza screams and wails as Eric Azure takes over on the lighter melodic choruses.

There is a small but interesting hip hop piece to "Crystal Swords Kill the Hordes." Every so often, one will notice something that sounds like record "scratching." The guitar and drum sounds get much better as the song progresses, and at the very end of this track, there is a fairly impressive guitar solo.

The lead single from Nevaeh is "Break Free From Your Life" which is quite different from the band's other attempt at a single. It begins with some feedback and heavy drums, then goes immediately into what almost sounds like 1990s pop-punk guitar riffs. When the vocals are added, Dani Doom and Azure alternate lyrics. The more melodic part of the chorus sounds like it has been Auto-Tuned, so this is sure to piss off a great deal of hard rock and heavy metal purists. Keyboards and electronic synthesizers can be great when used appropriately, but the Auto-Tune killed this track for me. This inspirational song about letting go of fear is upbeat, but it is far less heavy than many of the album's tracks.

Nevaeh includes two instrumentals--one of which is "Reverie." It starts off with a jazzy bassline and keyboard grove, but a slightly more "rock" vibe takes over in the middle when the heavier drumming is. There are also subtle electronic elements in the middle, and these elements become a lot more prominent as the song finishes. As the album's sixth track, "Reverie" is a huge change of pace from all the songs that come before it. The band's electronic programmers James "Keebler" Lemos (keyboards) Matt Ryan (also on guitar) really showed the diversity of their skills here.

One song that really did grab me is "Witch of the Woods." It is bombastic and traditionally metal sounding for the most part. The guitars and drums in the intro are loud and heavy, and so are the vocals! Even Eric Azure, who generally comes off as whiny to me, does a good job of shrieking in this song. I have to give him credit here for conveying the idea of a cackling old "Witch in the Woods." There are some electronic keyboard elements interspersed through out this song, but the great guitar-work courtesy of Matt Ryan and Julian "Reckless" Ibaniez is what stands out.

The album's final instrumental, title track "Nevaeh," wraps up the album. It is even further off the metal map than "Reverie." It's not bad though--I've just heard heavier music in massage parlors. Filled with the sound of an acoustic guitar and keyboards, it has a very relaxing, spa-like feel. Due to the frenzied energy that pours from this album, the band probably included this subdued song just so listeners could recover.

After listening to Design the Skyline's Nevaeh numerous times, I concede that they are probably not the "worst band ever," nor is their album the absolute worst ever. They and their album are certainly different and definitely not what I'm used to listening to for pleasure. There are a couple notable tracks that are worth revisiting such as "Witch in the Woods" and another hard rocker called "Under the Blood Driven Moon." Other than that, the coolest thing about this album is its cover with the bad ass bird of prey and the Pink Floyd-inspired prisms on it.

All jokes aside, I do admire this band for keeping on doing what they're doing and maintaining their diverse sound despite all the criticism. Design the Skyline is a very young band with all the time in the world to progress and find their best sound. This band has talent, but they are stuck in a place where the individual elements sound much better than the whole. As of right now, their debut Nevaeh just isn't something that will give them a wide appeal, but Design the Skyline may have the potential to gain some younger fans who could better relate to them and stand their musical chaos.
Posted by RockMaidenBritt at 9:57 AM

Email ThisBlogThis!Share to TwitterShare to FacebookShare to Pinterest
Labels: reviews