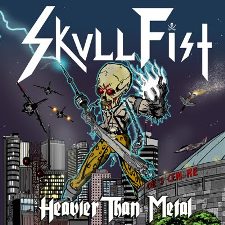 Toronto's Skull Fist aren't kidding when they say, "We live for heavy metal, and we quest for world domination. We fight for glory and forever ride the beast!" Not only are those words plastered all over their MySpace page, but based on this band's sound, look, and attitude, you can tell these guys (and girl!) are metal to the core. Heavier than Metal is their debut EP, and Skull Fist set out to be just that. Their sound is a mix of power metal, New Wave of British Heavy Metal, and glam--and each song is filled to the brim with this retro metal thunder.

Opening track "Sign of the Warrior" has a major power metal feel to it; more so than the rest of the EP.  The vocals are screeching, the guitar riffs are crisp, and it's FAST! It really prepares the listener for all of the balls out metal that is to come.

I absolutely loved the title track "Heavier than Metal" immediately. The vocals aren't as high pitched as on the first number, except for in the chorus, when lead vocalist Jackie Slaughter sings the line, "heavier than metal for meeeee." I'm convinced those are some of the greatest notes to be sung and recorded in recent metal history. The guitar riffs and rhythm section of this track have a real NWOBHM sound to them.

"Ride the Beast" and "Blackout" are the reason I say this EP has a glam metal feel to it. They both remind me of the heavier earlier Motley Crüe stuff. In these songs, Jackie Slaughter sounds like a young Vince Neil--but much better, because he actually enunciates the lyrics. His "woahs" and "yeahs" are spot on. The guitar riffs and solos in both of these songs have an early Crue vibe to them as well, and "Ride the Beast" especially shows off drummer Alison Thunderland's thunderous skills.

EP ender "No False Metal" is definitely a huge middle finger to those bands out there who Skull Fist sees as "false" metal. It sums up this band's attitude-- they want the classic sound. Skull Fist obviously likes the vintage '80s metal, and they deliver that sound they laud so much.

As someone who is predominately into '80s metal, I find Skull Fist to be a promising new act. I will admit though, when I first saw their song titles and names (Sir Shred, anyone?), I was skeptical. I thought they might have been exaggerating and parodying the music and time period I hold so dear. But after intently listening to the Heavier Than Metal EP, I have I begun to take seriously their "denim and leather" attitude. This pure rock 'n 'roll attitude is sure to make their metal predecessors proud, and I hope it inspires a new generation of metalheads to create new classics.

Posted by RockMaidenBritt at 7:59 PM