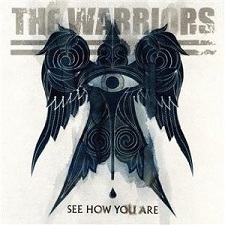 The Warriors are getting ready to release their fourth album See How You Are just as they set out on their North American Tour with The Ghost Inside, Set Your Goals, and Australia's own Parkway Drive. On their second release for the Victory/Riot label The Warriors prove once again their brand of metallic hardcore is relevant in an era where more melodic subgenres such as metalcore dominate the heavy rock scene.

The title track "See How You Are" is the very brief but memorable album opener. It begins slowly and quietly, but it gradually builds up to a heavy, angry song. I like the effect with the backing vocals during the chorus, which is one of the many "retro" or classic hard rock elements that appear on this album. You can almost picture this band sitting around, listening to Def Leppard as teenagers and thinking, "This is cool, but how can we make this stuff heavier?"

When "See How You Are" abruptly ends, my immediate favorite track from this album, "The War Unseen", begins. The intro riff is fantastic, and before the middle of the song hits, a Slayer-esque feel takes over the song. I think it may be the bass line and the fact that lead vocalist Marshall Lichtenwaldt channels the heavier side of Tom Araya into his singing. The "hey, hey" part of the chorus is extremely energetic, and it takes me directly to a Warriors live show on my first listen to See How You Are.

"Mental Chains" is probably the next biggest stand-out track, and it really changes the pace of the album. It has a hard and fast intro with a straight-up, ass-kicking hard rock vibe. After the intro, you can definitely hear The Warriors go back to their early days with the Rage Against the Machine-influenced groove that takes over this song.

After a few tracks, including the Hellyeah-on-roids sounding "Here We Go Again", "Subirse El Muerto" brings the album back to the crossover thrash The Warriors are also known for. When I first heard "Subirse El Muerto", I was pleasantly surprised. I thought the song sounded like members of Slayer formed a hardcore punk band. Again, Marshall Lichtenwaldt looks to Tom Araya for vocal influence, but this time a throaty, shouting punk sound takes over. This all may sound odd, but believe me - it works. This song is put together very well.

In fact, all of See How You Are is put together very well. The tracks are diverse, and many metal styles including thrash, groove, and hardcore come together to create this album. It also has some very classic hard rock riffs that seem to be styled after a wide array of bands all the way from metal acts such as Slayer and Pantera, hardcore punk bands like Black Flag, and alternative rap-rockers Rage Against the Machine.

While some of the songs - namely "The Enforcer" (it does have some intense lyrics, and I love the Judas Priest-sounding title!) and "Seize the Fire" - come off as monotonous and repetitive, I think this heavy album has something on it for rock fans who are into many musical styles and like to see creative fusions of them.

Posted by RockMaidenBritt at 12:17 PM