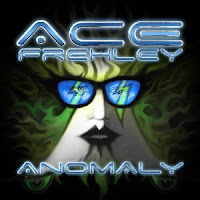 Many times when a "classic" band or artist comes out with a new album, mass audiences do not always buy into it because they just want to hear the hits. With two singles that get regular airplay on SiriusXM's Boneyard channel, Ace Frehley's Anomaly could prove to be an exception to this unfortunate rule.

The former Kiss guitarist released his first solo album in twenty years back in September of 2009. But why am I reviewing it after nearly six months after its release date? Sometimes albums or songs catch on slowly--and in this case it may not necessarily a bad thing.

I learned about Anomaly in October or November of last year after hearing its lead single "Outer Space" on satellite radio. When the DJ introduced the title of the song, I thought to myself, "Oh Lord... good old Ace is still milking the Space Man thing after all these years." A couple of days later I talked to my friend about the song, and he apparently had the exact same thought.

Intergalactic subject matter aside, this song is pretty hard rocking and all around great. The lyrics are sexy and sleazy, carrying on a great rock and tradition. The chorus is very memorable, and I find myself singing or humming it on occasion. I love the guitar work on this song, especially the riff played during the lyrics "I wanna take you to Heaven... Take you away from this Hell."

The second single from Anomaly, "Fox on the Run", drew me a little closer to this album. Having another song I was familiar with from the radio is what really prompted me to buy the album and devote my attention to it. I thought the song was a little cheesy at first, but I kept coming back to it because I am a sucker for 1970s glam covers. (Hey, that's what made Quiet Riot so awesome!)

"Fox on the Run", which was originally recorded by the British band Sweet in 1974, is a fun song about various run-ins with those ever present groupies of the rock world. It's got a got a great hook, and it's a nicely updated to add a more modern and heavier feel to a 35 year old song.

The album's lead track "Foxy & Free" was a good choice for an opener. (See the fox pattern?) It's heavy in the bass at the beginning, and it made me want to listen to more. Lyrically and vocally, this song isn't my favorite from the album. However, I was pleasantly surprised by the reference to Hendrix's "Voodoo Child" and "Foxy Lady." (Again with those foxes!)

"Outer Space" is Anomaly's second song, followed by "Pain in the Neck." This song begins with a killer bass line and quickly transitions into a very interesting, almost grunge sounding, guitar riff. The bridge is much more melodic, and then it goes back into the heavy grunge sound. "Pain in the Neck" is bluntly about what it sounds like it is about--a woman who is a pain in Ace's neck. It's a hard rocking song, but rather different that anything else I would have expected from an Ace Frehley album.

"Fox on the Run" comes next, then there's "Genghis Khan." This track is almost purely instrumental. The only lyric that pops up every so often is "So long, Genghis Khan. Now you're gone. So long." It sounds kind of bluesy, and it really reminds me of '80s-era Bad Company.

After that comes "Too Many Faces." It's repetitive, but catchy with it's chorus of "Too many faces in the mirror, always looking back at me." The guitar parts of this song get better and more exciting toward the end, and it contains a really good solo.

Anomaly's next track "Change the World" is a slower ballad that really changes the pace of the album. It is heart felt without being sappy. God, peace, and children are recurring themes in this song.

A much heavier instrumental called "Space Bear" follows, and the only way I can describe the beginning of this song is to say it has a kick ass riff. When I saw the title on the back of the CD (Yes, I have the actual hard copy of the album. Impressive during this digital age, right?), I was kind of hesitant to take it seriously like I was with "Outer Space." However, I was quite impressed with how modern it sounded without seeming contrived.

Another ballad "A Little Below the Angels" comes next. It seems to be autobiographical, in that it refers to alcohol, crashing cars, and having nine (maybe even ten) lives. It's an introspective song about the decadent trappings that can come with being a rockstar. This ballad has a memorable chorus, but the only thing that kills it is the group of children singing it toward the end. That just made a nice ballad too sweet for me.

"Sister", which follows, is another one of the heavier, harder rocking tracks on the album. After many listens, I'm still having a hard time telling exactly what this song is about. So now I'm convinced it is about a woman who is giving away something that's pretty dang good. I just don't understand the lyric "I call her my sister, but she's really not." I guess they just have a twisted relationship. I really like the lyric "She can take you around the world." It adds a certain sleazy sexiness to the song.

The next track, "It's a Great Life", begins with a groovy bass line. The verses and the accompanying guitar part are great, but the chorus isn't as memorable as some of the rest from the album. If a listener was only looking for catchy lyrics, the song could be forgettable.

Anomaly's final song is the instrumental "Fractured Quantum." The title led to me to expect something hard and heavy, but this track is quite melodic and very pleasant. Also, it begins with children's laughter and something that sounds like birds. It was as if I was listening to Kiss's "God of Thunder" at the beach with some seagulls. As strange as that may seem, the rest of the song is very good. I really like the fact that this instrumental doesn't just sound like a six minute guitar solo. It progresses and flows very well.

When I began listening to Anomaly in its entirety, I knew there would be at least two good songs on it because I was familiar with the singles "Outer Space" and "Fox on the Run." Other than that, I didn't know what to expect.

I knew Anomaly would feature excellent guitar playing, because obviously Ace Frehley is a guitar legend. However, I did have low expectations for the vocal performance. If you've heard the Kiss song "Shock Me", you know exactly what I'm talking about. As much as I love that song, the vocals on it are so bad they are laughable. I'm glad to say Ace has improved to go above and beyond that for this album.

Overall, I think there are several great rock songs with catchy hooks on Anomaly. I would recommend it to classic rock fans who are looking for an album of new songs to add their collections. I would also recommend Anomaly to anyone who is looking for something that is lighthearted and fun. Plus, who can't resist really cool CD packaging that folds out into a pyramid?
Posted by Anonymous at 10:11 PM