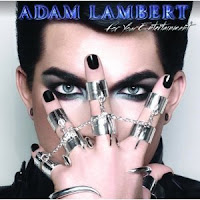 Before Adam Lambert's debut album For Your Entertainment hit retailer shelves and iTunes, AdamOffical.com took pre-orders for a "special fan edition" of the CD. It included a collectible hardcover photo booklet and bonus song downloads--"For Your Entertainment" and the non-album tracks "Down the Rabbit Hole" and "Master Plan." The latter songs are currently available on iTunes, and they are not "album only."

I have a question for Adam's record company and the album's producers: Why weren't "Down the Rabbit Hole" and "Master Plan" on the album's final cut? Actually, I have another question if I'm allowed to ask: Were they even considered?

The songs are great. I think both of them are much better than a couple of the songs that did make the final cut. I'm not sure which bonus track I like better, because they each have their high points.

I know I compare a bit too much, but I must say, "Down the Rabbit Hole" (as a friend of mine from Twitter put it) is highly reminiscent of "Pretty Vegas" from the J.D. Fortune-era INXS album Switch. Lyrically and style-wise it really reminds me of the song "Devil's Party" from the same album. On a side note, J.D. Fortune was an Elvis impersonator, and many people have said Adam has a 21-st century Elvis vibe.

"Down the Rabbit Hole" is electronic, danceable club fare. I absolutely love the references to Alice in Wonderland and the use of the phrase "stripper shoes."

The other bonus track "Master Plan" has a VERY catchy chorus and a cool beat. It has an empowering and anthemic feel just like "Strut." But by no means are they the same song. I think "Master Plan" is a bit deeper and more observant.

I feel like my assessment of For Your Entertainment is more complete now that I have reviewed the bonus tracks. I think these bonus tracks help fans and critics alike see even more facets of Adam Lambert's style and talent.

Don't get me wrong, I'm not one of those people who hates ALL electronic music. I own all of the Queer as Folk soundtracks, which are heavily electronic. I also love most '80s New Wave and synthpop. I just think Adam Lambert's voice is entirely too good to be messed around with, and it does not deserve to be over-produced.
Posted by Anonymous at 3:21 PM