Adam Lambert "For Your Entertainment" Review 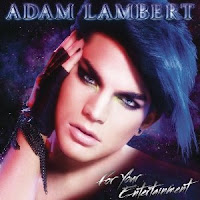 The words "highly anticipated" do not even come close to describing American Idol runner-up Adam Lambert's debut album For Your Entertainment. I can't even remember the last time I've been so excited about the release of a CD.

Let's face it. I'm an American Idol watcher. Ok, I'm am American Idol fanatic. All of my friends can now point and laugh at the "rocker chick" in her metal boots who listens to Judas Priest on a daily basis.

With that admission out of the way, I can now honestly say that in all my years of watching American Idol (Season 3 onward), I have never seen such an intriguing musical artist. I can't even bring myself to call Adam Lambert a "contestant." I refuse to trivialize him like that.

Any of Lambert's fans who watched his American Idol performances knows exactly which songs he sang, how he blew everybody away, and that he performed with KISS. I don't feel the need to explain that any further, and I don't want to continue to run Adam into the ground as the "American Idol Guy." Therefore, I will try my hardest to omit any mentions of the hit show.

As excited as I was about Adam Lambert's debut album, I honestly didn't know what to expect from it. When fans last saw Adam, he was a diverse performer with a glam-rock edge. So, that's all I had to base my hopes on.

After an entire summer of not hearing any new music from Lambert, the single "Time For Miracles" was released and featured in the film 2012. This song is a climactic ballad. It's good, but it doesn't become great until the last half when Lambert's signature energy and attitude really shine through. It almost reminds me of Aerosmith's "I Don't Want to Miss a Thing" from Armageddon.

After some marginal success with a ballad, the album's title-track, "For Your Entertainment" was unleashed upon the fans. I was not at all amused by this song the first five or so times I heard it. I felt misled as a rock music fan, and I was getting ready to run outside and yell, "Bait and switch! Bait and switch!" I pretty much tried to force myself to like it. It opens with the line "So hot out the box" for God sakes! It wasn't until the infamous American Music Awards incident that I fell completely in love with this song.

I originally wrote "For Your Entertainment" off as horribly over-produced dance/pop song. After seeing the "incident" (I watched it recorded. Ironically, I was at a Megadeth show when it aired), I really listened to the song's lyrics. It's unbelievably sexy and edgy. It may be the most danceable song you'll ever hear, but it's got a total rock attitude. Watch the music video for it. Adam's cane-wielding skills are quite reminiscent of Alice Cooper!

However, the good Adam giveth and the good Adam taketh away. There hasn't been much performing of "For Your Entertainment" on TV since the AMA "incident."

Since then, audiences have been treated to a more laid-back Adam Lambert in the form of "Whataya Want From Me." This song has been performed on many television and music and talk shows. It is a slow, introspective song that still unpacks a lot of Adam punch.

Aside from the better known singles from For Your Entertainment, the album has several high points. I really hope these songs gain some attention and radio play.

"Music Again" is fantastic. It was co-written by Justin Hawkins, formerly of the British glam band The Darkness. It has a strong rock vibe, and the backing vocal parts strongly remind me of Def Leppard. I can tell Hawkins tried to incorporate a lot of his old band, The Darkness, into this song.

I always smile when Adam sings the lines "mind, soul, et cetera" and "raison d'etre." It reminds me of Hawkins singing "extra curricular activities" in the Darkness song "Friday Night." He just always has to incorporate big or strangely rhyming words into his writing. I also like it when "better-uh" is used. It makes me think of the phrase "magical mysteria" in the Def Leppard song "Hysteria."

"Strut" is another completely stand-out track from For Your Entertainment. This song is filled with attitude, and it's almost anthemic. It really makes me want to stand up and shout to the world who I am. It definitely fulfills its purpose. Kudos for Kara DioGuardi for getting this one right!

"Sure Fire Winners" may be my absolute favorite from the album, and I bet it is the track most appealing to all of the rockers out there. I just can't help but melt when Adam sings the lyric, "all the girls in the clubs wanna know/where did all their pretty boys go?" I don't think I need to explain the meaning behind that one. This song definitely has "rock anthem" written all over it!

"Soaked" has Freddie Mercury written all over it. The huge and powerful beginning reminds me of Trans-Siberian Orchestra, however. The piano parts and vocals are plain beautiful. But at times, this song gets a little too "crooner" style for me though.

The last of my top favorites is "Fever." It's got a dance beat and one catchy chorus. The ending of this song is priceless, and I still can't believe someone could have such a vocal range. (Pure opinion: He's wasting it by not being in a hard rock or metal band.)

There are a couple of songs on this album, "Sleepwalker," "A Loaded Smile," and "Broken Open" that are great, and they show a completely different side of Adam. They are surely not bombastic or energetic like my usual fare. They are almost ethereal, and I just have to be in the mood for them.

"Aftermath" isn't bad. I just think it doesn't fit in. It sounds a bit like Chris Daughtry at the beginning. It's a straight-up pop/rock tune that gets kind of lost among all of the other tracks.

"If I Had You" would be one of my favorites if it wasn't for that spastic techno chorus. I love the verses, especially the opening lines "So I got my boots on/got the right 'mount of leather/and I'm doin' me up with a black-color liner." The part about the rockstar hotel trashing is good too, but I just thing the chorus kills this otherwise good song. The end is also kind of cool too, as it reminds me of a Katy Perry song.

Lastly, there is only one song on this album that I almost always skip over--"Pick U Up." If I heard this one on the radio, I probably wouldn't even know it was Adam Lambert singing it. I can't even believe he's listed in the writing credits. This sounds like something by the All-American Rejects. When I hear this song, I picture their whiny lead singer--that guy who always has the blank stare and looks like he's about to cry. I really don't get this song at all.

Overall, Adam Lambert's For Your Entertainment is an album that I would recommend buying. There is something on it for every taste. I may not love every single track on the CD, but this crazy rocker chick gives Adam Lambert an "A" for his vocal performance efforts and musical eclecticism.


*Check back later for a bonus review of the special edition album's bonus tracks!
Posted by Anonymous at 2:42 PM