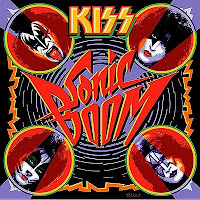 The long-awaited Kiss album Sonic Boom arrived exclusively on Wal-Mart shelves on October 6th. Now that I've had more than enough time to buy it and give it a few listens, I believe I can give it an honest review as a life-long Kiss fan and wannabe music critic.

With that said, I do think Sonic Boom is great. I can't rave about it too much, because I know, and I think we all know, that it is not going down in history with albums such as Love Gun and Destroyer. As I've mentioned before, I born during Kiss's non-makeup era. I was raised on "Lick it Up," "Let's Put the X in Sex" and "Hide Your Heart." I would probably even take the Fox over the Catman. Easy Catman, I AM SERIOUS!

I might be used to having some kind of lowered expectations when it comes to new Kiss albums because of the last two--Carnival of Souls and Psycho Circus. While they still have their merits because they're Kiss albums, I really don't think they are anyone's favorite. I was ready to be disappointed, or at least unimpressed, by Sonic Boom, the band's first studio album in more than a decade. While it is still not a history-making, legendary, iconic rock album, it is a very good album with some stand-out tracks.

"Modern Day Delilah" is Sonic Boom's lead track and lead single. I've heard it on SiriusXM's Boneyard channel several times, so I know it's not going completely unnoticed. I can honestly say that I don't even know if it is playing on my local "classic rock" radio station. They're so busy playing Lynyrd Skynyrd and Bob Seger, so who I'm not even sure they know who Kiss is.

Musically, "Modern Day Delilah" is pretty hard rocking, as most of the album is. The Paul Stanley-led vocals are good too. I don't find the lyrics to be incredibly cheesy, but I could see how some listeners might.

The next track, "Russian Roulette," is what I like to call your "typical Gene Simmons sleaze-fest." I love Gene. I'm probably one of the few women on Earth who can stand massive amounts of Gene. In all seriousness, if any other man sang some of those lines Gene (or any other member of Kiss, for that matter) sings, they'd probably get slapped. Not Gene Simmons though! This song does rock pretty hard, especially in the intro. SiriusXM's Boneyard has played this one a few times, but I don't know if or when it will be released as a single. It has potential and could really catch on.

Unlike the first two songs on Sonic Boom, the next three tracks are mediocre at best. "Never Enough" would be great--if it were a Poison song. Listen closely. Now tell me exactly what it sounds like. I'm not going to say it, but I know that you know.

"Yes I Know (Nobody's Perfect)" is another Gene number. It's not as good as "Russian Roulette," but it sure has all the "sleaze fest," including the glorious line "take off your clothes." I'm almost positive this song sounds like something else by Kiss, but I still can't quite figure it out.

"Stand" is also in this set of four songs that just don't live up to my "this is just a great rock song" standards. It starts out great. The first time or two I listened to it, I was thinking, "Great, Great, GREAT.... crap!" This one will fool you. The beginning verse builds up, and builds up, and then right when it gets to the chorus, disappointment. The lyrics attempt to be inspirational, but they begin to borderline cheesy. The songs on Sonic Boom have mastered the art of the almighty hard rocking intro. "Stand," however, is only good because of that intro.

"Hot and Cold," is the final of the fair-to-middling portion of the album. It's is another Gene song that doesn't live up to the greatness of "Russian Roulette." I don't know why, but I can't really get into this song, or even say too much about it. The chorus and rhythm are catchy though. The lyrics aren't the greatest though.

Other than the nice lead-in from the first two tracks, the best songs from Sonic Boom are buried at the end. I absolutely love "All for the Glory." When I first saw the title, I was expecting something lame. I was wrong! Eric Singer is a killer vocalist. I enjoy the edge and raspier tone of his voice compared to the other guys. The driving beat of the song, along with the guitar solo make "All for the Glory" an overall great rock song.

My absolute favorite song on Sonic Boom is "Danger Us." It is definitely the Starchild at his finest! Not only is the lyric "Danger you, danger me, danger us" clever and catchy, it brings me back to my beloved late 1980s Paul Stanley-led Kiss. Everything about this song is fantastic. I just hate waiting until the end of the CD to hear it!

"I'm An Animal" is not my favorite, but it's not bad. It sounds a lot heavier and rougher than the rest of album. There are many different sounding songs on it, so it's not like it doesn't fit or anything. It just really reminds me of "Unholy" or something else from Revenge.

Another song that sounds incredibly different is "When Lightning Strikes." It features vocals from our 21st Century Spaceman, Tommy Thayer. I think it is the least "Kiss-like" song on the whole album, but I truly enjoy it. It actually reminds me of many newer Def Leppard songs.

Wrapping up the album is the song "Say Yeah." Again, it has a great intro. I think it sounds very new and current--in a good way. It's probably my third favorite song on the CD. Paul Stanley sings lead vocals on the track, and the echo-effect in the beginning adds a certain mood and feeling to it. It's kind of intense, really.

Sonic Boom is a must have for any die-hard Kiss fan who would have bought it no matter what. Casual Kiss fans who have a couple of albums already would probably enjoy it too. It has several great tracks on it that would appeal to fans of each of the band's eras. Even though I doubt any of the tracks will reach the status of "Rock and Roll All Nite" or "Deuce," Sonic Boom is not one of those albums with one or two good songs and a bunch of filler that listeners want to skip.
Posted by Anonymous at 3:55 PM